Thomas Dudley, known as “Bang Bang, a legend in Dublin has been immortalized in a special plaque to his memory. 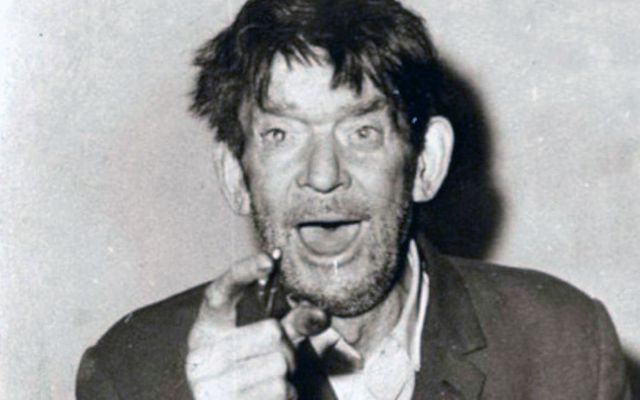 A legend who boarded trams and buses in Dublin and pointed a large church key as if it was a gun at passengers and shouted “bang-bang” has been immortalized in a special plaque to his memory.

Thomas Dudley, known as “Bang Bang,” died in January 1981 at the age of 74. His last years were spent in the care of the Rosminian Fathers at Clonturk House in Drumcondra, not far from Dublin city center.

In the 1950s and ‘60s, he was one of the best-known characters on the streets of Dublin, as he constantly boarded buses and trams and imitated his favorite cowboy hero, John Wayne, who was born in the same year, 1906.

Two years before he died, Bang Bang was immortalized in The Dubliners’ song “The Mero” which included the line, “Bang Bang shoots the buses with his golden key.”

People loved his childlike innocence.  He was the son of John Dudley, a chimney sweep, and his wife, Mary. His father died when Bang Bang was seven. His mother died, too, but it is not clear when.

Bang Bang spent much of his childhood in an orphanage in Cabra in Dublin.  He was buried in an unmarked grave in a little cemetery at the back of Clonturk House, along with a few dozen other former residents of the home.

Thirty-six years later, his final resting place was marked with a plaque on Monday, unveiled by the Lord Mayor of Dublin, Mícheál Mac Donncha.

Customers of the Bang Bang café in Phibsborough, Co. Dublin, named in his honor, pitched in to raise funds for the plaque.

Here is an interview with the man himself from 1975: