WATCH: A thrilling yet humorous race through 1965 Derry

"The Man from A.U.N.T.," now available from the Irish Film Institute, combines influences such as The Man from U.N.C.L.E. and Alfred Hitchcock Presents. 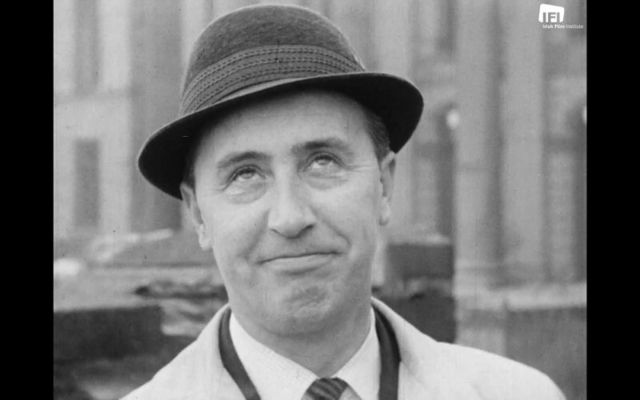 "The Man From A.U.N.T." is now available to stream for free on the Irish Film Institute's IFI Archive Player.

Terence McDonald’s playful homage combines influences such as The Man from U.N.C.L.E. and Alfred Hitchcock Presents, with the evident influence of slapstick comedies of the silent era.

"The Man from A.U.N.T." is a thrilling race through the streets of Derry as a mysterious and mischievous figure makes a daring escape from a calamitous police officer who is in pursuit.

Here called ‘the city of a thousand rumours’, many locations in Derry are featured in this adventure, beginning on the city walls and concluding at the pier.

In a memorable animated sequence, our Man from A.U.N.T. inadvertently sets off a cannon on the walls causing the face of the clock tower at the Guildhall to fall off the building!

This physical comedy, like another of McDonald’s films The Fugitive (1966), was intended for screening during the intermission of local pantomime performances organised by Fr (later Bishop) Edward Daly. The films ingeniously featured cast and plots from the pantomimes who appeared first on stage, then on screen.

This short film is part of The Terence McDonald Collection.

The Terence McDonald Collection at the Irish Film Institute

Terence McDonald was a teacher, film historian, film collector, and pioneering amateur filmmaker. Born in the city of Derry in 1926, the films he made during his lifetime are diverse in genre and subject. They range from short comedies and experimental films to expository documentaries covering topics such as travelling and cross-community theatre, mental health services, and films which promoted Derry as a developing city looking hopefully to the future. His work includes personal projects and films commissioned or supported by a range of public bodies.

Terence produced his films under the ‘Fairview Films’ banner, a title derived from the name of the family home in Rosemount Avenue, and somewhat intentionally misleading as he alone undertook all aspects of the work.

With a deep understanding of all aspects of production – his credits include cinematographer, editor, sound recordist, producer, and director – along with a wide knowledge of cinema, McDonald created visually sophisticated and culturally rich work. His films, shot primarily on 16mm film, feature a variety of references and influences. They also received widespread recognition with awards from the British Film Institute, the Munich Film Festival, and the National Film Institute (now IFI) Annual Film Competition.

McDonald’s work has a notable sense of place. It not only represents the natural beauty of Northern Ireland but captures the various sides of his hometown of Derry through filmic portraits of the city, from the Georgian architecture and thrice–sieged city walls to the growing facilities and industries of the ‘60s. His two homages to the silent comedy era, The Fugitive and The Man from A.U.N.T., offered local audiences the opportunity to see their home on the big screen (perhaps for the first time) as the backdrop to slapstick capers making full use of the city’s walls and hilly streets.

The Terence McDonald Collection is held and preserved by the IFI Irish Film Archive and these films are made available with the kind permission of Peter McDonald and Northern Ireland Screen.

"The Man From A.U.N.T." is published here with thanks to the Irish Film Institute (IFI), who IrishCentral has partnered up with throughout 2022 to bring you a taste of what their remarkable collection entails. You can find all IrishCentral articles and videos from the IFI here.