IrishCentral’s Book of the Month: “Surrender” by Bono

Join the IrishCentral Book Club this January as we read “Surrender: 40 Songs, One Story” by Bono, the frontman for Irish rock group U2. 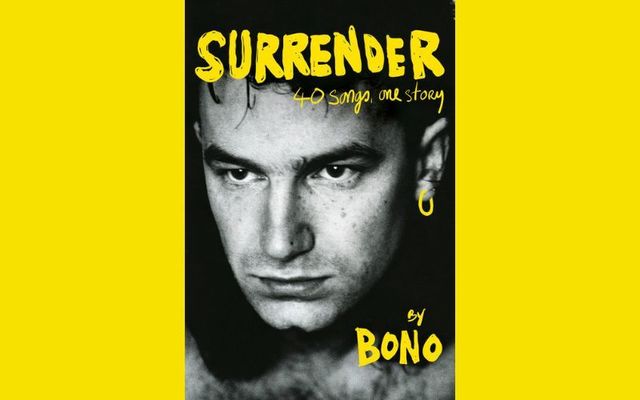 “Surrender: 40 Songs, One Story” by Bono is the January 2023 selection for the IrishCentral Book Club.

Throughout January, we’ll be reading Bono’s “Surrender: 40 Songs, One Story” which was published in November 2022 and has already become a New York Times best-seller.

Bono's Stories of Surrender: Tour has several dates at the Beacon Theater in New York City in 2023.

You can listen to Bono read an excerpt from chapter 15 of his memoir, entitled "Where the Streets Have No Name," here:

Synopsis of “Surrender: 40 Songs, One Story” by Bono

As one of the music world’s most iconic artists and the cofounder of the organizations ONE and (RED), Bono’s career has been written about extensively. But in "Surrender," it’s Bono who picks up the pen, writing for the first time about his remarkable life and those he has shared it with.

In his unique voice, Bono takes us from his early days growing up in Dublin, including the sudden loss of his mother when he was 14, to U2’s unlikely journey to become one of the world’s most influential rock bands, to his more than 20 years of activism dedicated to the fight against AIDS and extreme poverty.

Writing with candor, self-reflection, and humor, Bono opens the aperture on his life—and the family, friends, and faith that have sustained, challenged, and shaped him.

"Surrender’s" subtitle, "40 Songs, One Story," is a nod to the book’s 40 chapters, which are each named after a U2 song. Bono has also created forty original drawings for Surrender, which appear throughout the book.

Reviews for “Surrender: 40 Songs, One Story” by Bono

A Voge best book of the year.

“Honest and direct . . . [Surrender] is defined largely by humility. This is an introspective story written by a man whose spirit is never far removed from the sadness and grief of his childhood; the hunger, literal and figurative, of a teen wannabe rocker; and the gratitude of one who worked his butt off and made it to the top . . . This is the rare rock star memoir written by a rock star who, you get the impression, could have been a writer . . . Bono has a gift for making even the unattainable seem relatable . . . He’s humble, even self-effacing. He might be fun to have a beer with. He is very much of this Earth, even if on occasion he might seem to float above the water.” - The L.A. Times

“Compelling . . . Surrender is more introspective than salacious or score-settling, and proof that the tunesmith who wrote it also speaks fluent prose.” - The Washington Post

“Surrender soars whenever the spotlight comes on. Bono is never more powerful, on the page or the stage, than when he strives for the transcendence that only music can offer . . . [Bono] is open and honest, with language that can be witty and distinctive, addressing his competitive relationship with his father or growing up against the backdrop of Ireland’s political violence.” - The New York Times

“A rattling good yarn . . . characteristically expansive, but it whizzes by  . . . Bono has storytelling verve and a genuine desire for self-examination and is enthusiastic about praising others, often at his own expense . . . [A] generous, energetic book.” - The Guardian (UK)

“Bono’s memoir bares his soul . . . Has any rock superstar written a more revealing biography? He deftly balances the comical and profound and packs anecdotes with cameos by the rich and famous, from Frank Sinatra to Pope John Paul II.” - Daily Telegraph (UK)

“Bono’s honesty will win over his harshest critics . . . the U2 frontman’s memoir is a triumph . . . Honest, witty, informative and beautifully written. Surrender will surely join the ranks of the great rock memoirs.” - Irish Independent

The lead singer of U2, Bono was born Paul David Hewson in Dublin. He met The Edge, Larry Mullen Jr., and Adam Clayton at school, and in 1978, U2 was formed. The band released their first album, "Boy," on Island Records in 1980 and to date have released a total of 14 studio albums that have sold 157 million copies worldwide. Heralded by Rolling Stone as “a live act simply without peer,” the band’s record-breaking 360° Tour (2009–2011) remains the highest-grossing concert band tour of all time. U2 have won numerous awards, including 22 Grammys, more than any other duo or group, as well as an Academy Award nomination and the Amnesty International Ambassador of Conscience Award. In 2005, U2 was inducted into the Rock & Roll Hall of Fame.

Alongside his role in U2, Bono is a ground-breaking activist. A leader in Jubilee 2000’s Drop the Debt campaign, he next took on the fight against HIV/AIDS and extreme poverty, co-founding sister organizations ONE and (RED). ONE is a movement of millions of people dedicated to the fight against extreme poverty and preventable disease. With ONE, Bono has lobbied heads of state and legislatures all around the world, helping to ensure the passage of programs, such as the U.S. PEPFAR AIDS program, that have helped to save tens of millions of lives over the past twenty years. (RED)—which partners with companies to raise public awareness about, and corporate contributions for, the AIDS crisis—has to date generated more than $700 million for the Global Fund to treat and prevent AIDS in Africa. Since 2020, ONE and (RED) have also been fighting COVID-19 and its impact on the developing world.

Bono has received a number of awards for his music and activism, including the Freedom of the City of Dublin (with U2), Chile’s Pablo Neruda Medal of Honor, the Légion d’honneur from the French government, an honorary British knighthood, the Fulbright Prize for International Understanding, and TIME magazine’s Person of the Year (along with Bill and Melinda Gates).

He lives in Dublin with his wife, Ali Hewson.