WATCH: Rural Ireland reflects on the impact of phone boxes

In "Bye Bye Now," now available on the IFI Archive Player, rural Ireland reminisces on the joys and sorrows of phone boxes as they become obsolete in the modern world. 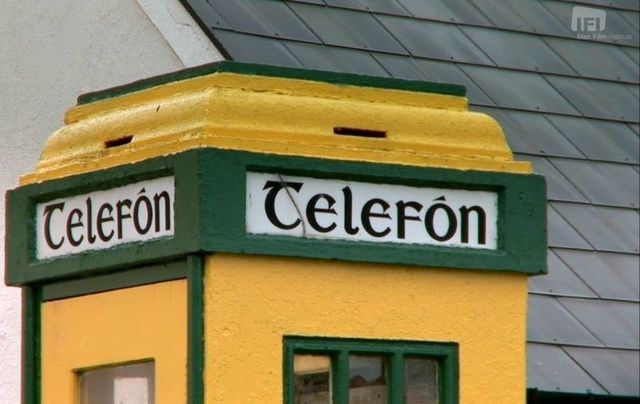 "Bye Bye Now," a short Irish film from 2009, is now available to stream for free on the Irish Film Institute's IFI Archive Player.

When phone boxes were first introduced in Irish villages in the 1920s, there was stern competition between local businesses to have one installed outside their property. The phone box would assume a monumental role in many people’s lives allowing them to stay connected with loved ones and receive all sorts of important news.

"Bye Bye Now" from the IFI features a couple in Mayo who are celebrating their 50th-anniversary and credit the box for helping to keep their long-distance romance alive. In Donegal, a man laughingly recalls how two women became trapped inside one while trying to wait out a bad storm. A young man nervously calls a maternity hospital for news of his young wife.

Although many of those interviewed admitted they do not use the service anymore, the phone box is a fondly remembered feature of Irish village life.

This film is part of the IFI’s newly unveiled collection F-Rated: Short Films by Irish Women. To view more from the collection click here.

About the IFI’s F-Rated: Short Films by Irish Women collection

F-Rated: Short Films by Irish Women presents a varied series of stories told through the prism of the female gaze. The films are drawn from collections preserved in the IFI Irish Film Archive.

The F-rating, which tags films written or directed by women, is used by exhibitors such as the IFI to promote films that fairly represent women on screen and behind the camera.

This collection brings together 36 films made by Irish women over four decades. Many of the films are written by women; all are directed by women. It includes drama and documentary; live-action and animation; films made with generous support and films made on a shoestring; films in Irish and films in English (one in Polish, one in Ukranian); independent films that were seen by few, and films that garnered global attention, Academy Awards and BAFTAs.

The short form has traditionally proved more accessible for women filmmakers, and so, despite their underrepresentation in the catalogue of mainstream feature film, women’s stories have been told over the past 40 years. Many of the stories presented here subvert mainstream male-dominated narratives and present alternative perspectives that are fresh and reflective of the lived experience of women in Irish society.

The Irish Film Institute invites you to explore this powerful collection, which shows the evolution of Irish filmmaking and indeed of Irish society itself, as interpreted by Irish women filmmakers over the past four decades.

Programme notes for F-Rated: Short Films by Irish Women have been prepared with the assistance of UCD interns Rachel Cahill and Rebekah Ryan.

'Bye Bye Now' is published here with thanks to the Irish Film Institute (IFI), who IrishCentral have partnered up with throughout 2021 to bring you a taste of what their remarkable collection entails. You can find all IrishCentral articles and videos from the IFI here.