WATCH: The 'Golden Boy' of Irish art celebrated in documentary

Patrick Scott, the Irish 'Golden Boy' of art, won a National Prize at the Guggenheim International Award in 1960 and represented Ireland at the Venice Biennale in the same year. 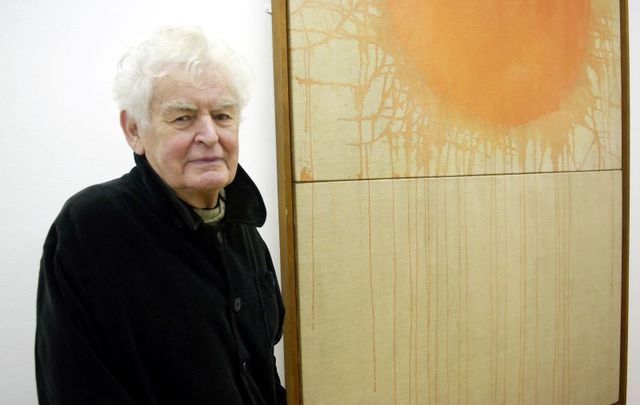 Patrick Scott at the official opening of SIAR 50, an exhibition looking back at 50 years of Irish Contempory Art in 2006 RollingNews.ie

Patrick Scott, a founding member of Aosdána, is one of Ireland’s most renowned artists who is famed for his gold paintings.

With many of his paintings included in important collections in the Museum of Modern Art in New York, not many other Irish artists come as highly acclaimed as Patrick Scott.

Despite spending 15 years as an architect (even working on Dubin’s Busáras), Scott is most well known for his gold paintings and in 2007 was presented with the title of Saoi by President Mary McAleese, the highest honor that can be bestowed upon an Irish artist.

In the tribute documentary below, “Patrick Scott: Golden Boy,” Mermaid Films explore the life and work of the renowned Irish painter and architect, starting with Scott’s major retrospective at the Hugh Lane Gallery in 2002.

Directed by Sé Merry Doyle and produced by Maria Doyle Kennedy and Andrea Pitt, the lively account traces the artist’s childhood, his background in architecture and his many artistic achievements. Scott’s zest for life and humble reflections on the creative process accompany moving moments at home with his cat whilst working on his signature gold leaf paintings.

Commissioned by RTÉ Art Lives, the film also offers a fascinating account of the 1950s bohemian art group the White Stag and contributions from Seamus Heaney, Stephen Pearce and Dorothy Walker enrich this celebration of the life and work of the ‘Golden Boy’ of Irish art.

Patrick Scott was born in 1921 in Kilbrittain, Co Cork. He began his career as an architect where he worked with Michael Scott on CIE’s Busáras before committing to life as a full-time painter in the 1960s.

He won a National Prize at the Guggenheim International Award in 1960 and represented Ireland at the Venice Biennale in the same year. His paintings have been exhibited worldwide and his work features in public and private collections.