Four-day celebration of Irish culture in Wisconsin a massive carnival of craic and ceoil. 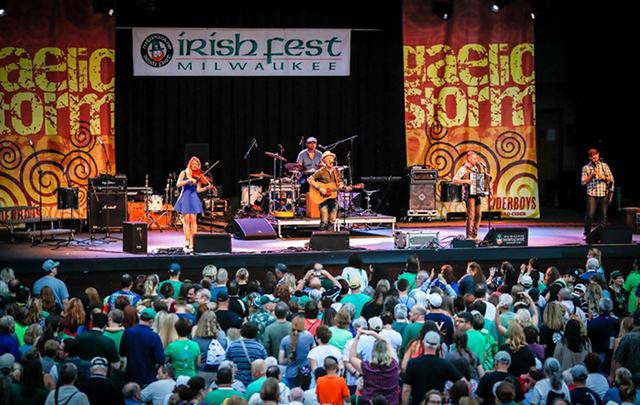 “Live and Legendary,” as the festival’s own tag line put it, the 37th Milwaukee Irish Fest was a massive success including an opening performance by Gaelic Storm, a showcase of talent from TradFest Temple Bar, renowned international chefs and much more over the four days of culture, craic and ceoil (fun and music).

Milwaukee Irish Fest is the world’s largest celebration of Celtic music and culture. The four-day festival showcases more than 100 acts on 17 stages at Henry W. Maier Festival Park on Milwaukee’s lakefront. The annual celebration of all things Irish is proudly presented by CelticMKE, a non-profit organization dedicated to igniting a love of Celtic culture in all people. With the help of more than 4,000 volunteers, CelticMKE and Milwaukee Irish Fest promote Celtic music, dance, drama, sports, culture, children’s activities and genealogy through the annual festival, as well as through year-round programming.

Other shows of note were the opening performance by Gaelic Storm and The Beatles – Celtic Style starring We Banjo 3, Skerryvore, and friends.

Northern Ireland author Tony Macaulay launched the American publication of his memoir, "Little House on the Peace Line," at Milwaukee Irish Fest. Macaulay also appeared in the Hedge School to discuss the work he and his wife do to facilitate reconciliation in Northern Ireland.

And two new whiskeys, the Yellow Spot and Green Spot, made their Milwaukee Irish Fest debut at The Jameson Lounge.

In addition to the newest food and drinks at the festival, there was, as always, classic Irish fare that really hit the spot. Festival-goers had the chance to sample traditional Irish stew, corned beef and cabbage, and a festival favorite, Gilles Jameson Frozen Custard.

Additional acts who played sets at the Fest included Celtica Pipes Rock, The East Pointers, The Fitzgerald's, and Open the Door for Three.

Several festival favorites also made a return in 2017, including Gaelic Storm, We Banjo 3, JigJam, Skerryvore, Dervish and The High Kings.

Fun for the whole family

From young to old, the festival holds something for all!

Families could collect stamps for Pirate Paddy passports, catch daily parades, search for gold in the Leprechaun Village, and participate in highland games, crafts and mini-golf. Plus, festival-goers had the chance to check out daily family entertainment at the Children’s Stages, including performances by fan favorite, Scythian.

Milwaukee Irish Fest featured several sporting events to watch and try out, such as Tug-of-War competitions, Currach races held in the lagoon, Gaelic football and hurling. Many also offered demonstrations as a hands-on way to learn more about the Irish sports.

IrishCentral are live at the epic finale of Milwaukee Irish Fest. Read more about the festival here http://irsh.us/2vNP6V4