Busting gender norms, little girl dresses up as Viking instead of princess

Historian Dan Snow's daughter made him proud when she opted to be 'The Red Girl' Viking warrior for her school's Medieval feast. 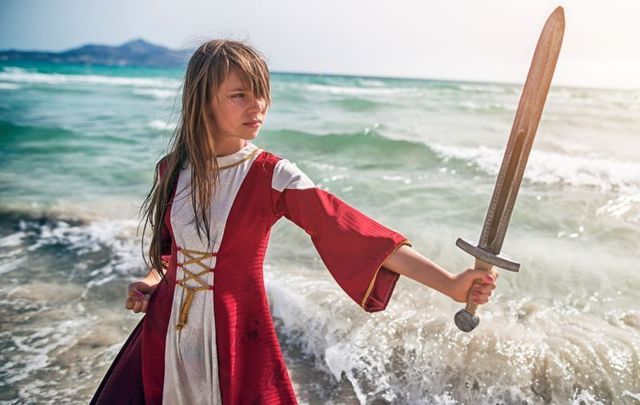 This historian's daughter made him proud when she opted to be 'The Red Girl' Viking warrior for her school's Medieval feast. Getty Images

Who needs a princess crown when you can have a Viking shield?

Dan Snow, a well-known British historian, podcaster and tv host, was brimming with pride when his daughter Zia opted to dress as a Viking warrior for her school's medieval feast.

Read More: Viking warriors and treasures are buried beneath Dublin

While her peers donned typically whimsical rig-outs, Snow's 7-year-old daughter instead played the part of a Viking fleet commander named The Red Girl.

Snow, the son of legendary newsreader Peter, previously said his daughter has a keen thirst for knowledge and is hopefully a "historian in the making."

My daughter had a 'medieval feast' at school yesterday. Mostly, the boys went as knights, the girls as princesses.
She went as the Viking fleet commander, 'The Red Girl' briefly referred to in the 12th C 'The War of the Irish with the Foreigners.'

"Lastly the fleet of of the Red Girl. And assuredly the evil which Erinn [Ireland] had hitherto suffered was nothing compared to the evil inflicted by these parties."

This wasn't young Zia's first time impersonating a Viking, however. Snow has previously shared glimpses of his daughter's fascination with Viking warriors:

One of the (few) disadvantages of strict gender blind parenting is when your daughter smashes you in the mouth with her Viking axe.

That proud moment when your daughter roars into a 5th birthday party full of princesses, wearing a Viking outfit, wielding axe and shield

Who is 'The Red Girl' in Viking history?

Sadly, strong female leaders from the Viking era are often overlooked in history.

Becky Gowland, a lecturer of archeology at Durham University, told The Guardian that one of the biggest mistakes archaeologists make when uncovering the remains of Vikings buried with their weapons is assuming they were all male.

"I think that's a mistake the archeologists make quite often. When we do that, we're just reproducing the past," Gowland said.