This Irish trifle recipe is the perfect New Year’s dessert

Have a go at this famous Irish trifle dessert! Martha Rose Schulman of The New York Times was introduced to trifle by her ex-in-laws – and was quickly hooked. 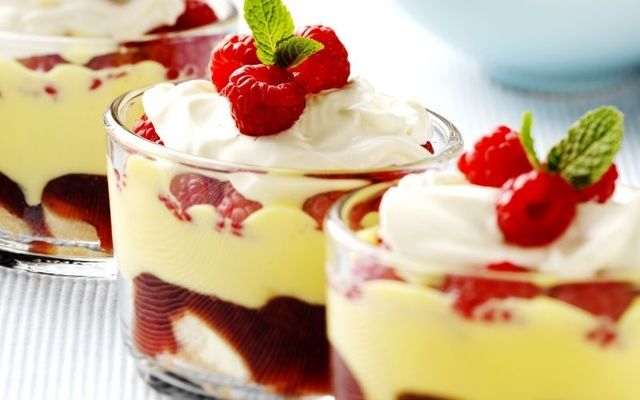 Have a go at this famous Irish trifle dessert! Martha Rose Schulman of The New York Times was introduced to trifle by her ex-in laws – and was quickly hooked. Getty

This famous Irish sherry trifle dessert recipe will have you licking your lips!

Martha Rose Schulman of The New York Times was introduced to trifle by her ex-in-laws – and was quickly hooked. She notes, “I call this Irish trifle because it was my Irish ex-in-laws who introduced me to this wonderful dish. It is one of the most irresistible desserts I make."

Not surprising. The history of trifle tells us that the recipe appears to be a uniquely Irish/British dish which has remained a well-kept secret from Americans, while Christmas pudding, Irish fries for breakfast etc. have all entered the food chain.

Trifle is that delicate blend that when made correctly is the best dessert of all. Though watch the sherry, too much can make grandma see reindeer all over again.

Ingredients for the cake:

Ingredients for the trifle:

Make the cake: Brush a 9-inch cake pan with softened butter and lightly flour sides. Lay pan on a sheet of parchment paper and trace around the bottom of the pan. Cut parchment round and place in pan with pencil marks facing down. Heat oven to 350 degrees.

Sift cake flour and cornstarch into a bowl or onto a sheet of parchment.

In the bowl of the stand mixer fitted with the paddle, combine 2 eggs, half the sugar, and the vanilla. Mix at low speed for 30 seconds to combine. Turn mixer to highest speed and beat for 5 minutes, until mixture is light, pale and fluffy. Turn mixer down to medium and beat for 3 minutes. Scrape mixture out into a large bowl. Gently fold in half the flour mixture, then gently fold in the remaining half.

Wash the stand mixer bowl thoroughly with soap and hot water, then dry. Add egg whites, remaining sugar and salt to bowl. Using the whisk attachment, beat at medium speed for 3 to 4 minutes, or long enough to obtain a soft, creamy meringue. Do not over-whip; you do not want a stiff and dry meringue.

Remove from oven and reverse onto a rack. Remove parchment paper and cool for 5 minutes, then flip the cake over and let cool completely. Wrap tightly in plastic if not using right away. Cake can be made a few days ahead and refrigerated or frozen for several weeks.

Assemble the trifle: At least 6 hours, and no more than 24 hours, before you plan to serve trifle, spread top of cake with jam and cut into 2-inch squares. Line a flat wide bowl (preferably a trifle dish) with cake squares, in one layer. Douse cake with 2 to 4 tablespoons cream sherry, more if desired. Cover with parchment or plastic wrap set a plate on top and set a weight (such as a large can of tomatoes) on top of the plate. Cover and refrigerate for 4 hours or longer.

Uncover cake. Spike crème anglaise with a tablespoon or two of sherry if desired, and pour over cake. Chill for an hour or more in the refrigerator.

Just before serving, beat cream until it forms soft peaks, and flavor it with a spoonful of cream sherry if desired. Spoon over trifle. Dust with a very small amount of nutmeg and serve.