Pubs and funerals in Ireland have a long history of intermingling. 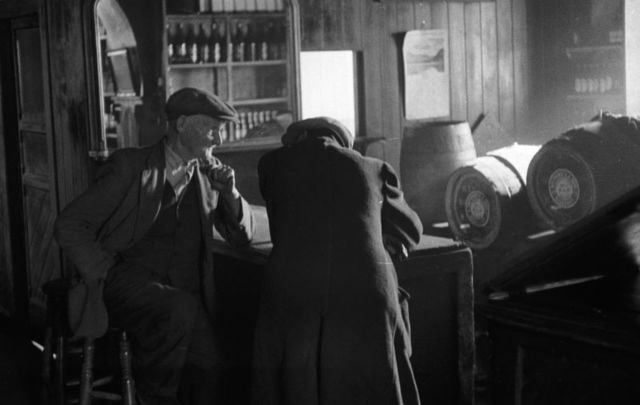 The Coroners of Act of 1846 was enacted during the height of Ireland's Great Hunger. Getty

Pubs and funeral services have long been intermingled in Ireland.

During Ireland’s Great Hunger, a law was enacted that required dead bodies to be brought to the nearest public house or pub until further arrangements could be made.

Exploring Ireland’s long history of intermingling between pubs and funerals, Jessica Gingrich writes for Atlas Obscura: “The Coroners Act of 1846 mandated that dead bodies be brought to the nearest public house. Publicans were required to store the corpses until an inquest was held, and those that refused were heavily fined.”

The law remained on the books until 1962, though it wasn’t necessarily enforced that long.

The law was born out of the increased rates of death during The Great Hunger, which saw approximately 1 million people die in Ireland from starvation and disease. "Mortuaries and medical practitioners struggled to keep pace with the endless flow of corpses. The bodies needed to be stored somewhere, lest they spread infection or be consumed by wild animals.”

“It was also a practical matter. In the days before refrigeration, beer cellars provided a cold storage space to delay decomposition. Eventually, even after the famine had passed, some pubs gained a reputation for their services and remained in the business.”

Read more: The rising cost of funerals in Northern Ireland and Ireland

Aside from the practicality of the bodies being held in pubs, it was also a matter of cultural significance as pubs typically served as the unofficial gathering space in communities.

“At the time there were no community halls or neighborhood meeting places. So, therefore, all social, recreational, political, and economic activities were concentrated in the pub," said Eamon Casey, a pub historian and author of “The Dublin Pub Saunter."

Similarly, publican John O'Dwyer said in "Dublin Pub Life and Lore," “The publican was the man who christened them, married them, and buried them, the local people."

Read more: How the keening tradition died out at Irish funerals

The tradition, however, has largely faded into the past in Ireland. Tom Coburn, a casket supplier, told Gingrich: “It wasn’t uncommon for a publican to combine undertaking with their normal day-to-day business 50 or 60 years ago, but the number has declined over the years. Throughout the Republic of Ireland, there are maybe 100 publicans that also still do the undertaking.”

Among those that haven't faded away is McCarthy’s Pub in Fethard, Co Tipperary, which boasts the tagline: “We’ll wine you, dine you, and bury you.”

The owners say: “Established by Richard McCarthy in the 1850s, McCarthy’s Hotel provided the services of a spirit merchant, restaurant, hotel, undertaker, draper, grocer, baker, hackney service, glass, delph and china shop and if you still couldn't get what you want - hire a few horses to take you elsewhere. Continuing in this tradition the present proprietor, Vincent Murphy (Jasper) fifth generation, has a pub, restaurant, and undertaker business which he runs with his family.”

Gingrich summarizes: "Irish pubs have always played a part in funerary rituals—and probably always will—but their role has expanded and contracted over time, constantly evolving to meet the needs of their communities."