Cathy Maguire, a Dundalk native who is based in New York, belted out Amhrán na bhFiann prior to Taylor's split-decision victory against Serrano in a record-breaking fight in Madison Square Garden. 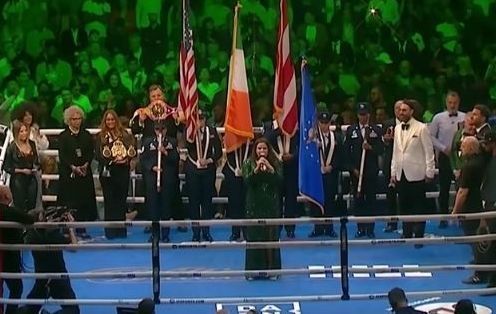 Maguire, a Dundalk native who is based in New York, belted out Amhrán na bhFiann prior to Taylor's split-decision victory against Serrano in a record-breaking fight in the historic venue.

Maguire said she was "incredibly honored and humbled" to be part of the historic event.

The New York-based singer provided the spine-tingle rendition of the national anthem shortly before Taylor's walk-out, evoking a huge reaction from the Irish contingent in the crowd.

The stirring rendition was performed without any backing track, making it all the more powerful.

The performance has generated more than 110,000 views since it was published on YouTube two weeks ago.

Paul, who rose to fame on YouTube, was furious with the judge's decision to award Taylor victory following the closely-contested fight and claimed that Maguire had privately agreed with him.

"I come back to the locker room, I'm chilling in the back locker room, the girl who sang the Irish national anthem comes up to me, is like, 'Hey, can I have a picture? Amanda won that fight," Paul said shortly after the fight.

However, Maguire said she told Paul that Serrano and Taylor were "both winners" and that there had been "no losers" in last month's fight.

"This is showbusiness and he has built his career on being controversial and creating havoc. The night belonged to Katie and Amanda and he was a small part of the picture that night. Though I was flattered that he referred to me as a 'girl' given that I'm forty," Maguire told the Sunday World.

GAA Roundup: All over for Tipperary as Cork romps