“This is Ireland” comes on the heels of Ireland’s 1916 Centenary celebrations and The Gathering before that. 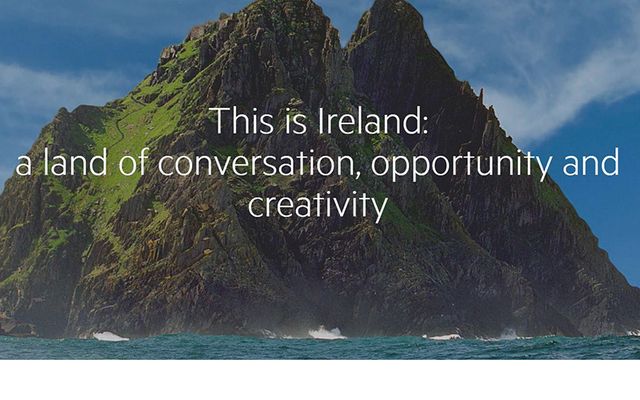 “This is Ireland” comes on the heels of Ireland’s 1916 Centenary celebrations and The Gathering before that. Creative Ireland

An Taoiseach (Prime Minister) Enda Kenny has launched www.Ireland.ie, a new website, the brainchild of the program Creative Ireland, which aims to promote the country throughout the world.

The message behind the new initiative, the Irish government’s legacy program following Ireland 2016, is all inclusive – live in Ireland, visit Ireland, invest in Ireland, study in Ireland. The Creative Ireland team also launched a short clip, entitled “This is Ireland”, to illustrate the function of the new portal to Ireland and the Irish community, www.Ireland.ie.

This is IRELAND is about our distinct creative spirit. Ireland.ie is the online portal to our country #creativeireland pic.twitter.com/e7v8Dpt3nX

The Creative Ireland Program will run from 2017 to 2022 and aims to improve access to cultural and creative activity in every county across the island. Coming on the heels of the highly successful 1916 Centenary and The Gathering initiative, Creative Ireland will showcase Ireland’s great artists and cultural assets to the world.

According to a government statement, released in December 2016, at the launch of the program:

“At its heart is collaboration – between central and local government, between culture and industry, between artists and policy makers – to facilitate an ecosystem of creativity.

“The transformational potential of culture was understood by the revolutionary generation. During this year, 2016, as we commemorated the events that led to the foundation of our state, we rediscovered the power of cultural creativity to bring communities together, and to strengthen our sense of identity.”

They added “It is an initiative that can define us for generations to come. It can redefine our role as a small sovereign republic in a globalized world. It is an important statement to ourselves and to the world.”

At the center of the Creative Ireland Program there are five pillars:

- Enabling creativity in every community

The empowerment of local authorities to lead the engagement of citizens with our arts and culture is essential.

- Ireland as a center of excellence in media production

The overarching, long-term objective of this pillar is to elevate the creative industries including media, architecture, design, digital technology, fashion, food and crafts.

- Enabling the creative potential of every child

Devising an integrated implementation plan for arts in education is a priority for Creative Ireland.

- Investing in our creative and cultural infrastructure

The Government recognizes that high quality infrastructure is critical for a vibrant arts and culture sector and that investment in cultural infrastructure underpins social cohesion and supports strong and sustainable economic growth.

Amid increasingly fierce global competition for investment, tourism and export markets, a clear articulation of a country’s values, capabilities and beliefs about itself is increasingly important.

"Creative Ireland is about placing culture at the centre of our lives, for the betterment of our people and for the strengthening of our society. Together we can do extraordinary things: we can make Ireland the first country in the world to guarantee access for every child to tuition and participation in art, music, drama and coding.

"We can make every local authority a dynamic hub of cultural creativity. We can unlock the huge potential of our people in the creative industries. And we can make an important statement to ourselves and to the world about the interdependency of culture, identity and citizenship.”