October is National Seafood Month - whip up this quick and easy treat to celebrate! 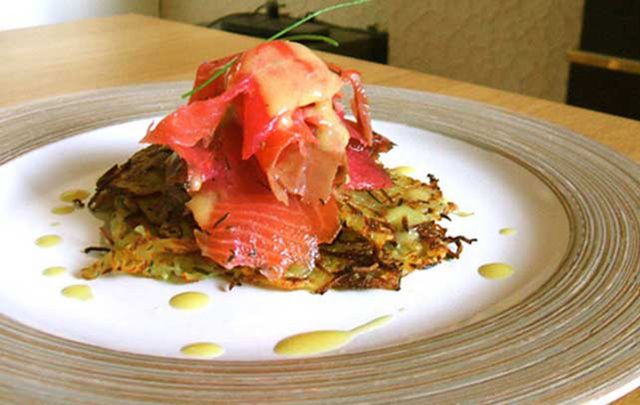 Who in their right mind wants to be in the kitchen cooking? That’s right, no one.

So for a quick easy snack (or if you make a lot of them it turns into a meal), what about some wonderful Irish smoked salmon on top of a potato pancake?

For centuries, salmon has been smoked in Ireland using time-honored techniques which capture and enhance the flavor and texture of this great Atlantic fish. Irish salmon has a firm, lean flesh which gives this king of fish its distinctive and greatly sought after texture.

At the W Hotel here in Miami, I use Spillane Seafoods. It is a family-run business, situated on the shores of the beautiful Lakes of Killarney. Close by, the mighty Atlantic Ocean is home to some of the world's finest salmon fishing grounds.

Salmon are spawned in the pure rivers of Kerry during the autumn. The following springtime, the young salmon (smolts) navigate their way to the open sea, where they will spend the next three to four years feeding and growing.

Then, in a miracle of nature, these salmon will return homeward, finding unerringly the exact river in which they were spawned.

As they return, they are caught by local fisherman and so begins the process of preparation for smoking.

The salmon is filleted and trimmed by hand. It is then salted and rinsed many times in natural spring water. Once prepared, the salmon fillets are smoked in a specially designed oven using smoldering oak chips for several hours.

Now for the pancakes, or boxty, as my old man calls them.

Boxty is a traditional Irish potato pancake. The dish is mostly associated with the north midlands, north Connacht and southern Ulster, in particular, the counties of Mayo, Sligo, Donegal (where it is known locally as Poundy or Poundies), Fermanagh, Leitrim, and Cavan.

Boxty was seen as so much a part of the local culture in the areas in which it was made, that the following poem was written:

“Boxty on the griddle,

Boxty in the pan,

If you can't make boxty,

You'll never get a man.”

Drop a tablespoon of milk onto hot greased pan. Cook thoroughly to a golden brown on each side.