You can almost feel the fresh Irish sea air while you enjoy this delicious healthy seafood dish. 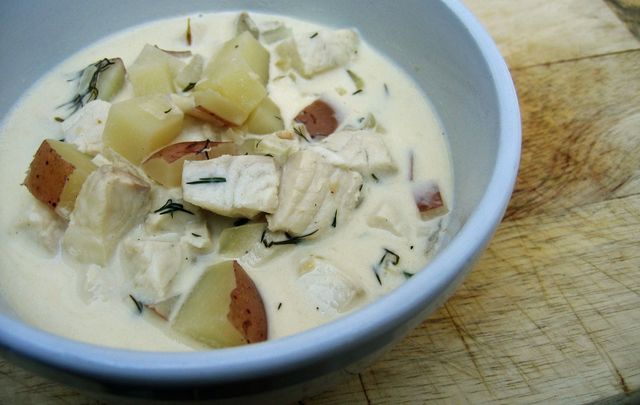 It’s not surprising that chowder is an Irish menu staple. Seen as a “poor man’s food” the hearty soup made with cream and seafood is right down Ireland’s alley when it comes to wholesome local produce.

The popularity of chowder is All Ireland Chowder Cook-Off, in Kinsale, County Cork where about 1,000 people come out every year to takes the county's favorite. The Irish may be world-class when it comes to chowder chops but what does it take to make a perfect batch.

The soup is so old, its name itself derived from the Latin calderia, which originally meant a place for warming things, and later came to mean cooking pot, the recipe is ever varying.

According to the Kinsale Good Food Circle, a good chowder starts with cream and wine, and then varying combinations of the popular basic ingredients are added, including prawns, lobster, mussels, and clams.  Many chowders also featured a vegetable component – chopped leeks, fennel, and celery being popular.

Of course, there are healthier options to this recipe using stock and no wine for example but the basic ingredients and natural flavors of this dish will blow you away. And what better way to serve this sumptuous healthy and home-grown feast than with some homemade brown bread slathered with Irish butter.

- Bring the fish stock to a gentle simmer in a large pan and add the salmon and haddock.

- Cook for a couple of minutes until tender.

- Transfer to a plate with a slotted spoon. Set aside.

- Melt butter in a separate large pan over medium heat.

- Sweat the onion, carrots, leek, and celery for about 10 minutes or until they are softened

- Add the dill and peppercorns.

- Cook for a further 5 minutes.

- Stir the flour into the vegetable mixture and cook for 5 minutes, stirring constantly.

- Gradually pour in the fish stock, stirring until smooth after each addition.

- Boil and simmer for 15 minutes until all of the vegetables are completely tender and the liquid is slightly reduced.

- Just before serving add a little milk to thin it out to your desired consistency.

- Add the cooked salmon and haddock and warm through.

- Ladle into bowls and garnish with cream and some parsley.