Irish recipe for Brussel Sprouts with bacon for Christmas

There's always someone who says they "hate" Brussel sprouts but have they tasted this Irish food board recipe... it has bacon. 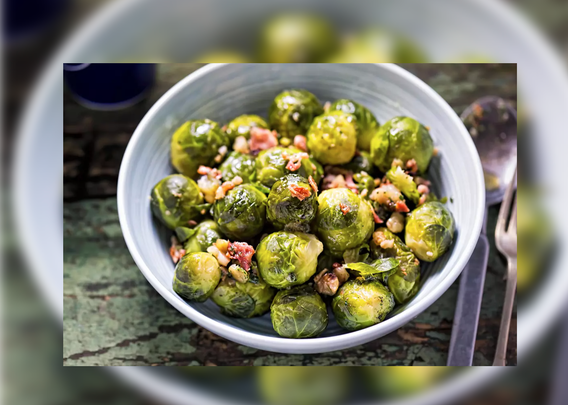 Brussel sprouts are synonymous with Irish Christmas dinners but there are plenty of folks who say they don't like these "mini cabbages". We are not among them and we're sure this recipe, including lardons, will change people's minds.

For many of us Irish folk at IrishCentral towers apart from potatoes the other vegetables that appear on our Christmas dinner plate are celery, carrots and Brussel sprouts. While the latter might get a bad rap with some folks we have to say that these Irish-grown green beauties cooked correctly are divine.

These wonder greens, Brussel sprouts were likely first cultivated in Ancient Rome and elsewhere in Europe as far back as the 13th century. During the 16th century, their popularity grew in the likes of Holland and Belgium, which is where the name came from.

In Ireland and the United Kingdom, the Brussel sprout is associated in many of our minds with Christmas day but in truth two-thirds of the annual growth of this member of the brassica vegetable is consumed outside the Christmas season.

As the crew in Waterford, Grow it Yourself, put it:

"While many people will only associate Brussels sprouts with Christmas dinner, you can (and should) enjoy this veg for most of the year. Not only are their tons of nutritional benefits from eating sprouts, they also play a vital role in the winter veg garden for many GIYers.

"While they do have a long growing season (8 months), they are extremely prolific – just three or four plants will produce a mound of produce in the lean winter months, with each healthy plant producing up to 2kg of sprouts."

Without further ado... here's a bangin' recipe for Christmas!

- Place the Brussels sprouts in a large bowl. Drizzle with olive oil and season with salt and black pepper, tossing to coat.

- Transfer the sprouts onto a large baking tray, making sure they’re spread out in a single layer. Scatter the lardons evenly over the sprouts.

- Roast for 25 minutes until golden, turning halfway through.