This gin distilled in Donegal is flavored with seaweed

An Dúlamán Irish Maritime Gin is flavored with locally-harvested seaweeds and captures the essence of the region. 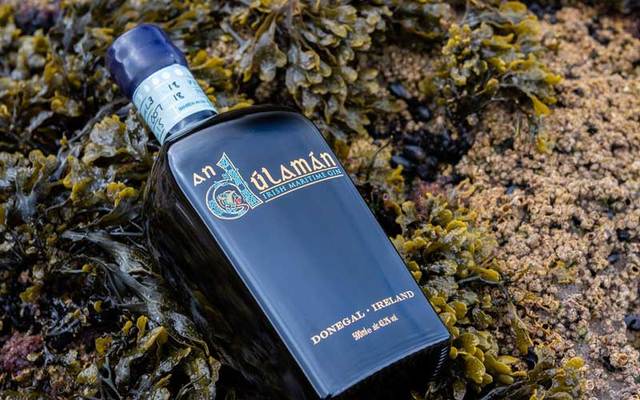 Sliabh Liag Distillers’ flagship drink is flavored with locally-harvested seaweeds and captures the essence of the region.

The distillery, which is based in Carrick in south Donegal, was founded by husband and wife team, Moira and James Doherty. It is Donegal’s first distillery since 1841 and is one of several new distilleries popping up across the country as gin sees an upsurge in popularity in Ireland.

An Dúlamán Irish Maritime Gin, which is now sold in 15 countries, is inspired, in every aspect, by the region. Even the packaging design pays homage to the bottles that were washed up on Donegal beaches from shipwrecks of the past.

James Doherty told the Irish Independent that they got the inspiration for the seaweed-flavored gin when they were harvesting fresh dillisk with his aunt at Muckross Head.

“At the time, my wife Moira asked has anyone ever done anything with this in alcohol?” he recalls.

“It was the moment where we went ‘You know what, the scary thing is that this could be a big idea and not a little idea,’” he said.

“We wanted to do something that could have a legacy, rather than just be a little lifestyle business. With people looking for local stories, people wanting innovative brand ideas and people doing different things and clever things, we thought we can build a hyper-local story on the Donegal coast.”

According to their website, “Dúlamán” is the name of an Irish folk song that relates a conversation between two seaweed collectors. It is also the name of one of the five locally-harvested varieties of seaweed used in the gin.

James told GinFoundry.com: “The concept was to use seaweed as a botanical but specifically to create a ‘gin of the sea’ and not ‘of seaweed.’ So we set about distilling as many botanicals as we could lay our hands on including the seaweeds as we could to learn their properties. Using them fresh, dried, frozen; understanding their idiosyncrasies and seeing how they went together. The biggest challenge apart from the bizarre way some of the seaweeds (carrageen moss particularly) behave when kettle infused was the challenge of retaining the fresh, salty, umami flavours from the fishy, dirty flavour was a major headache.”

Many gin and tonics are now garnished with an abundance of fruit and herbs, we like to keep things simple in Donegal and let An Dúlamán talk for itself. We garnish with a simple slice of lemon as it complements the gin without overpowering it. Some of us like a wee ribbon of dillisk thrown in, but that's only for the brave! #seaweed #seaweedgin #gin #craftgin #garnish #cocktail #ginandtonic #distilledindonegal #drinkresponsibly

Dohery, who is the grandson of a renowned local poitín maker, told the Irish Independent that he wanted to revive the county’s ancient distilling tradition.

“To me, it’s the county that should be distilling and we try to tell a Donegal story as opposed to just a generic Irish story. It’s a place apart politically, it’s a place apart geographically and I think culturally it’s incredibly proud of its sons, wherever they end up in the world. Distilling is in the soul of this place.”

Along with An Dúlamán Irish Maritime Gin, Sliabh Liag Distillers also distills Assaranca Vodka and bottles their Silkie Irish Whiskey on site. There are plans to expand to a larger distillery in the nearby town of Ardara, which would provide a significant boost to the local economy and create employment opportunities.

“The idea is to build a sustainable business that’s here for the long term. Can we build a branded spirits company that’s based in Donegal, as opposed to a Donegal spirits company if you like, so it’s more of an international business? We believe that is the way to generate the most employment, to build an ecosystem of businesses that support each other up here.

“It kind of works on a smaller scale already with the gin. All the local businesses engage with us and we engage with them. The community seem to have taken the brands to their hearts in a very positive way and people gift our stuff to friends and family. It’s wonderful to see how people are taking your story and then making it their own and then telling it to other people.”