Sligo Town will hold a number of live open-air concerts as the world-famous Fleadh Cheoil takes a tentative step toward normality. 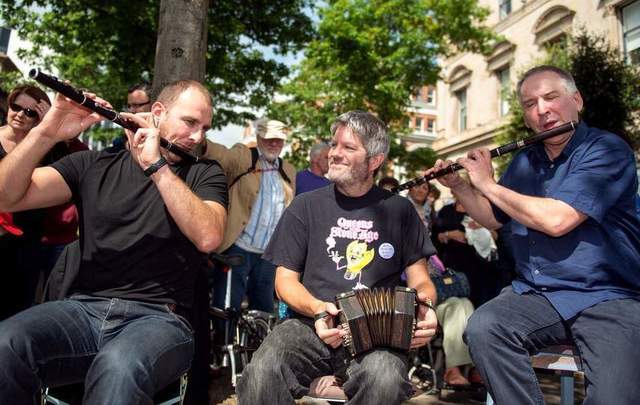 FOR 70 years Comhaltas Ceoltoiri Eireann has conditioned us to think when August rolls around we think of Fleadh Cheoil na hEireann, the All-Ireland music competitions that have sparked and maintained a year-round dedication to Irish traditional music, song, and dance as well as a cultural movement.

In pre-pandemic days, of course, it was the largest festival in the world devoted to Irish music with record-setting attendances growing year by year.

Like everything else the pandemic put those joyous celebrations that filled many Irish streets over nine days to an immediate halt both in 2020 and 2021, depriving the town of Mullingar the symbolic nod of bringing the Fleadh back to where it first began in 1951.

But Comhaltas refused to close shop and found a way to operate virtually as well, especially when it came to rallying around the Fleadh franchise through the new medium that technology provided for online production. And they found that they were able to count on the same supportive partnership of Bord Failte (Tourism Ireland) and TG4 and RTE that they enjoyed in the halcyon in-person days.

With no clear way to plan for people to gather this year despite some still restrictive opening in Ireland and around the world, Mullingar opted to wait another year to have a full-go at the Fleadh experience in 2022.  CCE and TG4 experimented with some pre-produced programming last summer during Fleadh week which still garnered a lot of attention for its lively entertainment and as a placeholder.

In 2021 CCE decided that it would launch several initiatives under a new title called FleadhFest that would still aim to be an uplifting force for the country in general through programming, appearing on social media and TG4, and also serving as a rallying vehicle for its county and provincial organizational units.  t would be a flexible format of historical video efforts through social media channels like the FleadhFest YouTube channel.

Yet as things were relaxing due to vaccinations leading the way to partially opening up, there were hopes that a hybrid approach should be planned for as well. And into the breach, Sligo Town stepped bravely forward to take on the challenge of planning live events accessible to the allowed numbers decreed by the governmental authorities.

Blessed with a still formidable Fleadh executive team that hosted two fabulous fleadhanna in 2014 and 2015, they saw it as another opportunity to promote the Wild Atlantic Way and all the other tourist treasures to be found all around Yeats Country and its breathtaking mountains and seascapes.

Bartley Gavin, chair of the Sligo FleadhFest group, decided that a series of open-air concerts could be attempted under the conditions prevalent at the time.

“It’s a wonderful opportunity to get live traditional music back into the open air, give viewers a real sense of positivity with top-class performances, and hopefully, by the time next year’s Fleadh comes around, things will be closer to normality,” said Gavin in a press release.

Their team has organized a number of concerts, sessions, and even competitions over nine days beginning August 1 with much of it viewable over www.Fleadhfest.ie website and some on TG4.  There are a series of live evening concerts at 8 p.m. (3 p.m. EST) featuring the Sligo-based Knocknashee Ceili Band (August 1), Teada (August 2), Moxie (August 6), Dervish (August 7), and Martin O’Connor Trio with Cathal Hayden and Seamie O’Dowd (August 8).

There will even be competitions taking place over the weekend of August 6-8 giving a flavor of a normal Fleadh Cheoil.  Solo competition winners in 2019, the last year the Fleadh was held, were invited to compete again this year with many in Ireland appearing in person while any overseas competitors submitted video selections that will be adjudicated with the live performances.

Spectators, however, will not be allowed, but for the first time, the competitions will be screened online for everyone to get an inside look at the process of competition and adjudication. Given how controversial some of the placement calls in the past have been, this could be very interesting looking into the future.

The director-general of Comhaltas, Labhras O’Murchu, has recognized the importance of living in the virtual world for the past 18 months steering his organization through the shutdown.  Rather than focus on restrictions, he offered encouragement saying, “It’s a wonderful opportunity for our musicians to lift the spirits of people at home and abroad through the sharing of our culture and music.”

“The Fleadh Cheoil has brought musicians to Ireland from all over the world for many years. FleadhFest will enable us to share our music with nationalities across the world who can’t visit Ireland this year but who we know will be with us in spirit.”

One has to really admire the efforts of Comhaltas as a voluntary organization to deliver such an ambitious and valuable display of cultural entertainment around this FleadhFest enterprise. And to also recognize the full support of the Irish government’s Department of Tourism, Culture, Arts, Gaeltacht, Sport and Media through its Minister Catherine Martin along with the aforementioned Bord Failte and TG4 and RTE for their invaluable commitments to fostering the traditional arts in Ireland and abroad.