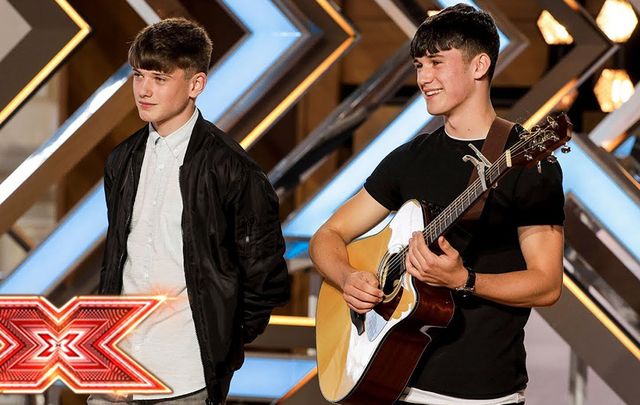 Stars in the making: Sean and Conor Price, on The X Factor. YouTube

“I’ve got goosebumps on my goosebumps,” as X Factor judge Nicole Scherzinger said. The Price Brothers blew British X Factor judges away on Saturday night with this version of “All Along the Watchtower”.

Brothers, Sean (15) and Conor (17), from Blessington, County Wicklow, started out their singing careers busking in Dublin’s city center. Their fresh take on Jimi Hendrix’s classic, combining singing, rapping and guitar-playing, reminded the judges what auditions for the X Factor are all about.

All four X Factor judges - Simon Cowell, Nicole Scherzinger, Louis Walsh and Alesha Dixon (standing in for Sharon Osbourne) – were blown away by the performance.

Cowell, known as the hard nut of the judge’s panel said “This is probably one of the best auditions we’ve had. I’m going to say something to you guys – I don’t want to change a single thing from what I saw and heard today.”

He added: “Every so often I sit in these auditions and think… thank God we found people like you.”

The siblings from Blessington, Dublin, offered up a modern rendition of Jimi Hendrix’s All Along The Watchtower, complete with rapping from guitar-playing Sean, 17, and singing from 15-year-old Conor.

Scherzinger, who was celebrating her 39th birthday, told the Wicklow lads they have the “It Factor” and added that their performance gave her goosebumps. The boys got four thumbs up and are headed through to the Bootcamp round of the British reality program.

Earlier this year another Irish youth with a very different style amazed the Simon Cowell during the Britain’s Got Talent auditions. Leah Barniville received high praise indeed from the cumudgeonly Cowell when he said “a billion percent, yes” following her operatic performance of Caruso by Lucio Dalla.

Barniville, just 14-year-old, from Ratoath, County Meath, was greeted by a standing ovation by all four judges and tears from her little brother in the audience after this stunning performance.

For such a small little islands we’re certainly blessed with incredible talent.