“The Unforgivable” star Aisling Franciosi’s career is on the rise

This Dublin star may be only 28-year-old but she's already got some serious credits to her name and her star is on the rise. 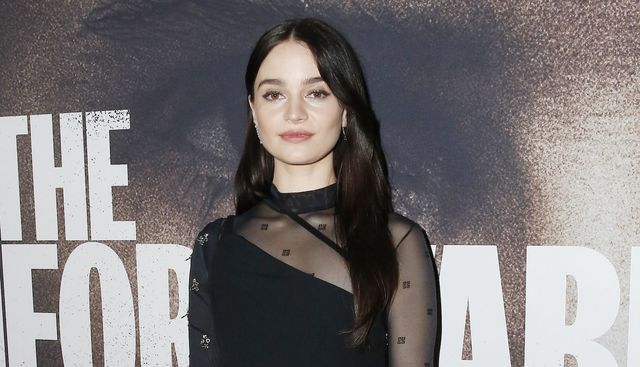 What's next for Sandra Bullock's young Irish co-star? She tells all after "The Unforgivable" premiere in LA.

Sandra Bullock’s new Netflix movie The Unforgivable got some fairly lousy reviews but it’s the top streaming title on the network, proving once again that she’s critic-proof.

One of the film’s co-stars is Irish actress Aisling Franciosi, born and raised in Dublin to an Irish mom and Italian dad. (Wikipedia says she’s fluent in English, Gaelic and Italian.)  Aisling, 28, plays the long-lost sister of Bullock’s character, and speaking to Vogue about her role, she recounted that during one scene she was scared of potentially infecting Sandra with Covid.

“I had to hug her for a solid 10 minutes while we got a shot, and I was both petrified and happy,” said Franciosi.  “Petrified because I was thinking, ‘Pleeeease don’t let me be the one to give Sandra Covid on this job!’ but happy because, well, I was hugging Sandra Bullock!”

The cast reunited earlier this month at the film’s LA premiere.  “Seeing people enjoy watching a movie in a movie theater again was awesome,” said Aisling, who’s heading to Dublin for Christmas before resuming work in February.

Though she’s only 28, Aisling already has a few decent roles under belt, including a stint on Game of Thrones and the popular BBC series The Fall with Jamie Dornan – that role earned her a supporting actress gong in 2015 from the Irish Film and Television Awards.

Aisling told Looper.com that she hopes her future roles are varied – “if anyone wants to cast me in a comedy, I am perfectly happy with that,” she said – and that she’d love to have a go at playing Sally Bowles in Cabaret.  (Fellow Irish actress Jessie Buckley is currently wowing London audiences in a new revival.)

"It would be the biggest risk ever, but just to be able to do it would be so cool," she said. "Although I love the original, so I don't know that I would want to touch it. But I would love to do a musical film, and I like the darkness that there is to that one."

Here's the trailer for "The Unforgivable":