Could McGregor be the equal of one the greatest fighters in history? Dana White called him "the Irish Ali" (though he may have forgotten Muhammad Ali was very proud of his own Irish roots). 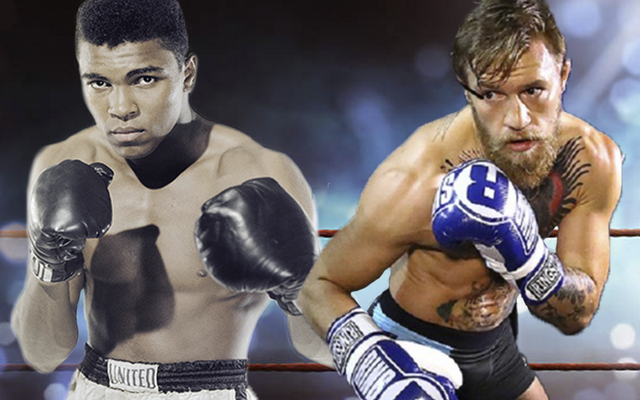 Mixed Martial Artist and boxer Conor McGregor has been hailed as an equal of Muhammad Ali.

Anticipation is building before his fight with Floyd Mayweather Jr. next month and the pair has engaged in some controversial trash talking with McGregor telling his opponent to, “Dance for me, boy!” - a phrase criticized as racist by many.

UFC President Dana White, however, seemed unperturbed by the Dublin man’s language and told the media, “I haven’t seen a mental warfare game like this since Ali. This guy is like the Irish Ali. You don’t ever want to start comparing somebody to Ali. You just don’t do it. But, when you look at this kid, there is nothing like him, since Ali.”

What White apparently didn't realize is that Ali had Irish roots and was very proud of them, with his ancestor Abe Grady immigrating to the US from Ennis Co. Clare.

Trash talk is nothing new in the UFC world and Ali himself was no stranger to racially charged rhetoric - once called his opponent, Joe Frazier an “Uncle Tom” and more.

‘It’s going to be a thrilla in Manila when I kill that gorilla,’ ” he once told journalists whilst punching a toy gorilla.