Brendan O'Carroll caused some controversy when he referred to Tyler Perry's race when asked if the US actor would make a guest appearance on his popular "Mrs. Brown's Boys." 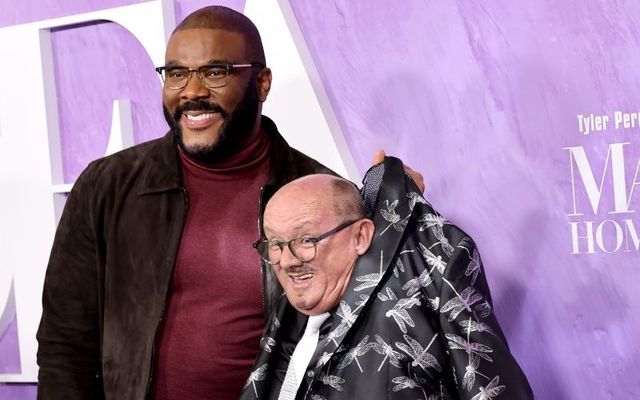 Tyler Perry is hyphenated to the max: entrepreneur-actor-director-writer…the list goes on and on.

His "Madea" movies have grossed hundreds of millions at the box office, he’s created original content for Oprah Winfrey’s OWN channel, he housed Prince Harry and Meghan Markle at his stupendous LA estate after they ditched the royal family…you get the picture.

Perry, 52, has it all going on, and he’s not gonna let cancel culture dictate who he works with judging by a social media dust-up over one of his Irish co-stars.

"A Madea Homecoming" was released on Netflix last week, and it features Brendan O’Carroll, the 66-year-old Dubliner and creator-star of the popular BBC/RTÉ Irish comedy series "Mrs. Brown’s Boys."

Perry and O’Carroll were interviewed on BBC's The One Show last week, and the Irish comic was asked if he’d like Perry to make a guest appearance on "Mrs. Brown’s Boys."

O'Carroll replied: "He's very expensive, and so far we haven’t had anyone of his color in there so I don't know if we could have him in.

"But you know what, I'd love that, but I think more importantly I'd love to do another movie with him."

Cue the outrage and claims that O’Carroll is a racist. Some delicate users of Twitter were deeply offended and demanded an apology, but unfortunately for them, Perry didn’t call for his new Irish friend to be cast aside.

"So I think it should be on a case-by-case basis to understand what intention is there. If you talk about comedy and comics and the things that make us laugh, when you try to start to censor you are going to do a great disservice to what comedy is."

O’Carroll is also ready to move on. “What Tyler does and what I do is well known around the world. If you go, 'I'm surprised about that,' you need to cop on."

In "A Madea Homecoming," O’Carroll is again in character as Mrs. Brown, heading to America for the graduation of a grand-nephew. She encounters the mama Madea, once again played by Perry, and lots of hilarity ensues.