Best-selling author reflects on lessons of life and the Celtic spirit. 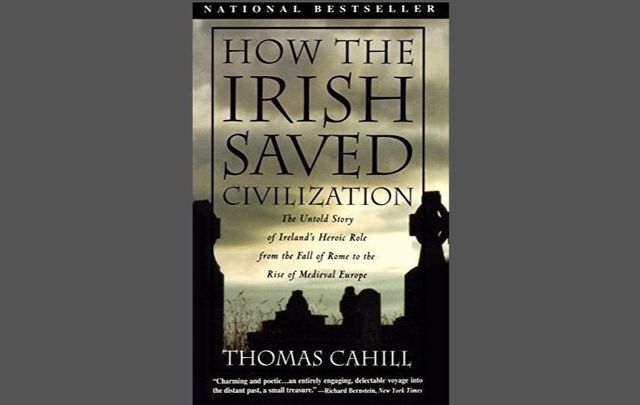 Best-selling author Thomas Cahill reflects on lessons of life and the Celtic spirit.

Thomas Cahill is a bestselling author and scholar whose landmark book, "How the Irish Saved Civilization," marked its 18th anniversary in 2013.

The book, which spent two years on The New York Times bestseller list, tells the story of fifth-century Irish monks who copied, and thereby preserved, almost all of what has survived of Western classical poetry, history, oratory, and philosophy. It also explains how the monks took that learning to the continent, then overrun by Germanic barbarians, and left their unique mark on Western culture.

"How the Irish Saved Civilization" was the first in Cahill’s "Hinges of History" series, which dissects formative moments in Western civilization. In the newest addition, "Heretics and Heroes: How Renaissance Artists and Reformation Priests Created Our World (Vol. VI)" Cahill offers an engaging look at the period and its lasting influences on our modern world.

Born in New York City to Irish-American parents and raised in the Bronx, Cahill was educated by Jesuits and studied ancient Greek and Latin. He continued his studies at Fordham University, where he completed both a B.A. in classical literature and philosophy, and a pontifical degree in philosophy.

Cahill and his wife, Susan, also a writer, divide their time between New York and Rome. He is also the author of "A Saint on Death Row: The Story of Dominique Green," which chronicles the true story of a young man who was executed after eleven years on death row.

What is your current state of mind?

I’m seriously concerned about the future of the U.S.A. and the future of the planet. In the U.S. we seem to have come to a political impasse in Washington, D.C., even though a clear majority of Americans favor the solutions of the Democratic Party – help for the poor and marginalized and the vigorous regulation of financial markets. Such sensible reforms would triumph easily if enormous amounts of secret money were not being funneled to the sneaky little pols in state capitals who create gerrymandered districts, which give us many more Republicans in the Congress than the voters actually want. The snowfall of secret money has been made possible because voters don’t pay much attention to what is being done in our state capitals and because of the Republican majority on the U.S. Supreme Court who have opened the gates of graft to the Koch brothers and other repulsive right-wingers.

As for actual snowfalls, we will be seeing fewer of them and much wilder swings in our global weather patterns, as the planet continues to warm, thanks to the century-long machinations of corporate energy suppliers. The oil companies have been destroying the Earth, our only home, and we have been letting them do it.

Who is your hero?

Anyone who shows courage is a hero to me, whether in the distant past or the present moment. Dorothy Day, the great saint of New York, was a hero, as were the Irish peace activists, especially the atypical politician John Hume and the atypical priest Alec Reid. Edward Snowden is a hero. What a hard thing he has done out of a profound sense of responsibility. Dick Cheney has called Snowden a traitor, but it is actually Cheney who is the traitor, along with W. and the other Bushmen who led us into a war for which there was no reason. The blood of hundreds of thousands permanently stains their hands.

Nelson Mandela was a hero, as is my dear friend Desmond Tutu. The archbishop and his wife, Leah, and their four children put their lives on the line on behalf of justice in South Africa. For the nearly three decades that Mandela was in prison, the Tutu family were in grave danger, but they never stopped speaking truth to power.

Another great figure of courage is the Pakistani teenager Malala Yousafzai, whom the insanely stupid Taliban are always trying to assassinate because she speaks out forthrightly on the rights of females – and even of Muslim girls! – to an education. But there are so many such figures in the East: I would mention especially the Burmese activist Aung San Suu Kyi and the imprisoned Chinese writer Liu Xiaobo, both sublimely admirable.

What is on your bedside table?

I usually have two books going, one fiction and one non. At present, I’m reading my way through Alan Furst’s extraordinary fictional accounts of life behind the European lines before and during World War II. I’m nearly finished the sixth book, "Kingdom of Shadows," which offers a vivid account of what it was like to live in Paris in 1939. There are six more volumes to go.

In my non-fiction reading, I’m trying to decide whether it is possible that the political culture of Washington, D.C. will ever be able to reach salvation. My current choice, the hilarious "This Town" by Mark Leibovich, offers a resounding “no.” Next will be "The Dream of the Celt" by the marvelous Mario Vargas Llosa. It’s about Roger Casement, a fascinatingly conflicted figure of tremendous courage from the early twentieth century.

What was your first job?

In high school I was a caddy on a very upscale golf course and learned to loathe golfers. The ones who were there as part of the occasional office party, sponsored by their boss, were kind and humane (and big tippers). The regular members were a hideous bunch.

I was an infant, not yet able to walk, lying on my parents’ bed, and my mother was changing my diaper. My father was shaving in the nearby bathroom and they were talking to each other, even though they couldn’t see each other. I realized that these sounds that came out of their mouths were their messages to each other. I had discovered language.

My mother often quoted a saying of her own mother, an immigrant from Williamstown, Co. Galway: “When I had cash to treat the gang, this hand was never slow.” It was actually a quotation from a late nineteenth-century American barroom ballad, but my mother and her mother intended it as encouragement to be generous whenever one could. In recent years I noticed that an elderly neighbor, Shelly Wortzman, never passed a beggar without giving him a good-sized handout. So from my grandmother, whom I never met, the poetic advice of generosity to friends; from Shelly the silent example of generosity to strangers.

Where do you go to think?

Inside myself, which requires only silence, which is increasingly hard to find in our world.

What is your hidden talent?

I play the piano.

Your favorite quality in friends?

Favorite country you have visited?

Italy. I love Ireland, where I’ve lived in the past and where all four of my grandparents came from (Galway, Kerry, and Laois). I often visit Paris, the most beautiful city in the world, where a part of my beloved family live. But Italy is for me the capital of pleasure – in art, architecture, music, food, and friendship.

Best opening line in a book or piece of music?

The “Kyrie” of Bach’s Mass in B Minor.

Movie you will watch again and again?

"The Apu Trilogy" by Satyajit Ray. Also "Ashes and Diamonds" by Andrzej Wajda.

My wife Susan, our children Kristin and Joseph, and our grandchildren – Devlin, Lucia, Nina, and Conor, to whom my new book is dedicated.

What trait do you most deplore in others?

What is your motto?

If you weren’t a writer what would you do?

I would love to have been an operatic tenor.

What have you been working on recently?

My new book, "Heretics and Heroes: How Renaissance Artists and Reformation Priests Created Our World." It is the sixth volume in the "Hinges of History" series and it is the most difficult book I’ve ever written. No one tries to combine the Renaissance and the Reformation in one volume because they go off in such different directions, even though they emerge from the same sources and occur in the same period.

What’s next for you?

The seventh and last volume in the "Hinges" series, which will take us from the Enlightenment to the present.