In Berlin, U2 frontman Bono hints that it may be the end of the road for the Irish rock band 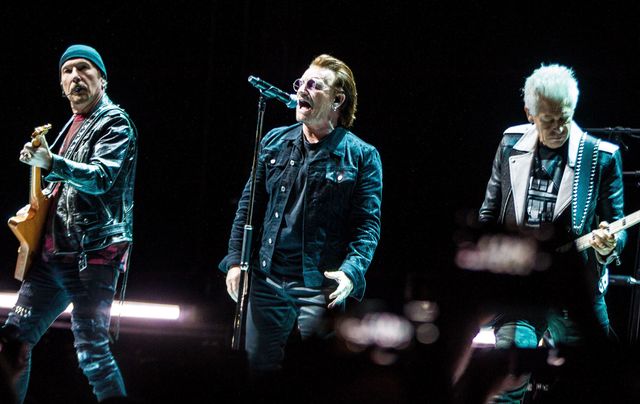 Bono hints that U2 may be 'going away' Getty

U2 frontman Bono hinted at what may be the end of the iconic Irish rock band while at their final experience + innocence tour stop in Berlin, Germany.

The Irish Times reports that Bono said to the crowd: “We’ve been on the road for quite some time – just going on 40 years – and this last four years have been really something very special for us. We’re going away now.”

Last week, the decades-old rock group had a tour stop in their hometown of Dublin. Ireland’s capital city was supposed to be U2’s final tour stop for the European tour, but the group had to return to Berlin to perform a make-up show for a previously rescheduled date.

Speculation surrounding the group’s final chapter has been further fuelled by performances of deep-cuts such as 'Dirty Day' while in Dublin, as well as 'The Unforgettable Fire,' and 'Stay (Faraway, So Close!)' while in Copenhagen.

Similarly, Bono’s health has come into question. The lead singer said last month that he “nearly ceased to be.”

“It was pretty serious,” he said. “I’m all right now, but I very nearly wasn’t. I’ve had a lot of warnings. A fair few punches over the last years. There were some serious whispers in the ear that maybe I should have taken notice of.”

However, on Twitter, @U2gigs pointed out that hints of retirement are par for the course at the end of U2 tours.

Every tour I've covered, right back to Vertigo, every final gig is the same: mass panic that this is the last gig. (Well, OK, not on JT30 since this tour had already been announced.) Ten bucks says I'll be covering another gig with you folks sometime down the track. #U2eiTour

What do you think - are Bono and the boys calling it a day? Share in the comments