Sci-fi movie set to film on Skellig Michael once more amid objections due to heritage and wildlife concerns. 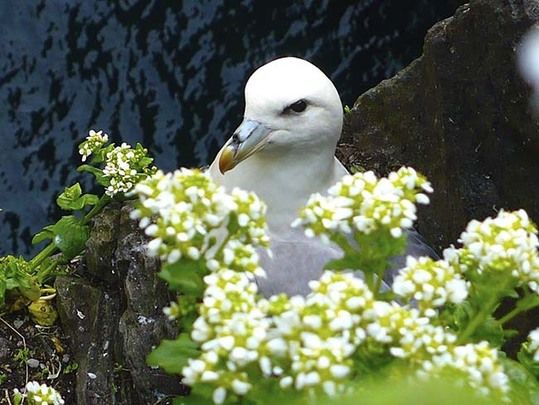 “Star Wars” has been given the go-ahead to return to Skellig Michael, (Sceilg Mhichíl) the UNESCO World Heritage Site, off the coast of Kerry, the Minister for Arts, Heritage and the Gaeltacht, Heather Humphreys, has confirmed.

Lucasfilm is to return to Sceilg Mhichíl to film scenes for the “Star Wars” franchise this month. Minister Humphreys has described the move as a significant boost for Ireland as an international film location and has hit out at “those attempting to turn” what is a good story into a negative story.

Concerns have been raised by a number of individuals and wildlife organizations about the impact on the heritage and on the birdlife on the island, including An Taisce, local poet Paddy Bushe, and Irish Times Columnist Fintan O’Toole.

The proposal for filming was finalized at the end of last week and comes at the end of months of close consultation between the Department of Arts, Heritage and the Gaeltacht and the film production company.

A large production crew from “Star Wars” visited the scene on Tuesday of last week. Around 30 members were ferried to the island.

Strict environmental and ecological conditions are being put in place to ensure there is no negative impact on the UNESCO World Heritage Site and its birdlife, the press release confirming the arrangement has said.

An ecologist and specialist staff from the Department’s National Parks and Wildlife Service (NPWS) and the National Monuments Service will be present for the duration of the filming and will have the authority to stop or modify filming at any point, should any concerns arise.

Minister Humphreys said “Sceilg Mhichíl is one of our most dramatic and beautiful islands and it is very easy to understand why its stunning scenery has caught the attention of the makers of one of the world’s biggest film franchises. In considering Lucasfilm’s request to carry out limited filming on Sceilg Mhichíl this month, I have balanced the positive benefit it will reap for the Irish film industry and the South Kerry region with the need to ensure that the island’s unique environment and wildlife is fully protected.

“Specialist staff from my Department have been in discussions with Lucasfilm since March of this year in relation to a limited amount of filming, expected to last two to four days. Last year, I witnessed first-hand the stringent ecological and environmental safeguards and mitigation measures put in place by my Department, as well as by the OPW, to ensure that this wonderful UNESCO World Heritage site and its outstanding birdlife were fully protected during three days of filming. Specialist staff were on site last year to supervise the filming activity and were fully satisfied that there were no negative impacts on the island, its wildlife, habitat or built heritage. We are introducing further measures this year to ensure the environment is fully protected.

“Months of preparatory work have been undertaken, including a birds’ survey, which allowed for the collection of detailed site specific and up-to-date information on all island seabirds. My Department’s scientific staff have worked with Lucasfilm in recent months to ensure all necessary safeguards are put in place. This includes a highly detailed ecological and screening assessment of the proposed film work and stringent bio-security protocols.

“Based on the scientific evidence available to me, I am satisfied that what is being proposed by Lucasfilm will not adversely impact the integrity of the Special Protection Area (SPA) on Sceilg Mhichíl or on its biodiversity. Specialist staff, including an ecologist and personnel from the National Parks and Wildlife Service, will supervise the shoot and will have the authority to stop filming should any concerns arise.

“Those attempting to turn this into a negative story seem to be completely overlooking the fact that up to 180 people visit the island on any given day. In contrast, for the short duration of filming being proposed, peak activity levels will involve about 100 people, under strict supervision and with extensive ecological and biodiversity safeguards in place.

“The return of “Star Wars” to Sceilg Mhichíl is another win for Ireland and the Irish film industry, which is a growing and dynamic sector of our economy. Later this year, when the latest Stars Wars film is released, the incredible beauty of Sceilg Mhichíl will be brought to hundreds of millions of cinema goers across the world. This is a great example of how film-making can operate in harmony with environmental protection providing all necessary safeguards are in place, allowing us to showcase our unique cultural and heritage to a global audience.”