“Song of Granite” explores the culture of sean-nós singing through the life of famed Irish folk singer Joe Heaney. 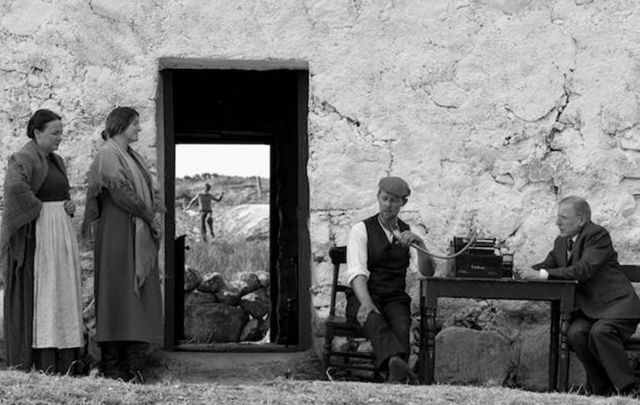 Pat Collins’ “Song of Granite” uses the life of Irish singer Joe Heaney to create a movie tribute to the Irish tradition he held dear.

Opening in New York on Wednesday, November 15, Ireland’s foreign-language Oscar entry “Song of Granite” is a beautiful and stirring depiction of the tradition of Irish sean-nós (old-tradition) singing, centered around the life of famed Irish folk singer Joe Heaney.

While the movie follows the life of Heaney from birth to death as any good biopic should, music and song holds center stage throughout, as can be seen from the exclusive clip of the movie featured below in which we see Heaney (at this point played by sean-nós singer Mícheál Ó Chonfhaola) amidst the UK Irish traditional music and singing scene, speaking about the impact of sean-nós singing.

“In the motion of the song, you won’t hear or see anything else around you,” Heaney states.

“You are alone for those couple of verses.”

“We wanted to make the song and singing the central part of the film,” states “Song of Granite" director Pat Collins.

“It was important that we could experience the singers as if we were there in the room with them. The singing is hypnotic and meditative and feels as if it is emerging from the earth.”

Read more: This traditional Irish singing will leave you mesmerized

Born and raised in the Connemara Gaeltacht (Irish-speaking region in the west of Ireland), Heaney lived in Glasgow and London before making his way to Manhattan to become a doorman, performing at the Newport Folk Festival, and becoming a lecturer on the topic of the Irish singing tradition.

Played by two actors and a sean-nós singer - Colm Seoighe, MacDara Ó Fathartha, and Mícheál Ó Chonfhaola - Heaney’s presence and talent, as well as his struggles, are brought across with the aid of minimal dialogue, relying on his art to tell his tale. Any dialogue throughout the movie is mainly in his native Irish (Gaelic), with subtitles allowing all to enjoy the enormity of Heaney's work.

From the off, “Song of Granite” shows Ireland to be a place of wild, natural beauty, that is offset with the beauty of its traditions, and the heartbreak of those who decide to leave their native home behind while bringing those traditions with them.

While the movie allows a glimpse into the life of Heaney and the hardscrabble life he led, from the close-knit community in Carna, Co. Galway, to Scotland and England, onto the lonely hussle and bussle of New York, it's the depth of the sean-nós tradition that shines through at all times.

It acts as a love letter not just to the place where the tradition originated but to the people and communities who, through their passion, have ensured it has stayed with us, especially in times when many other cultures are losing these parts of their traditional identity.

Ireland’s choice entry for the Academy Award for Best Foreign-Language film in 2018, “Song of Granite” has the chance to be placed on the shortlist for the accolade this coming December.

“I like the idea that a film in black and white, in Irish and about sean-nós singing is representing the country. I’m very pleased about that and I'd liked to think that it’s a modern cinematic work as well,” director Collins told IrishCentral.

“Maybe it will bring sean-nós singing to a wider audience.”

A scene from a session in the UK. Image credit: Song of Granite.

For more information and tickets, you can visit the Film Forum website here.