This mind-blowing version of a cappella originated in the American South as a form of congregational and community singing. 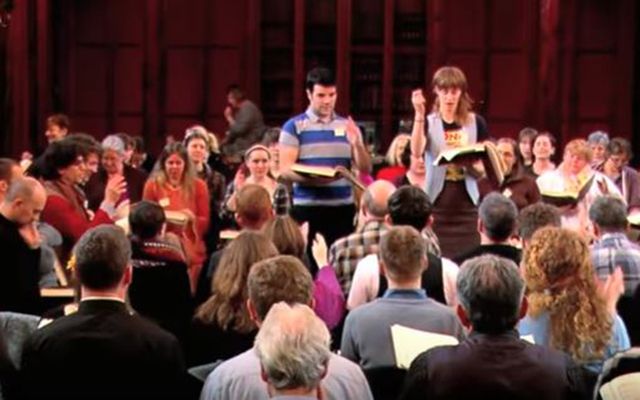 Welcome to the incredible talent of the Sacred Heart Singers of Cork, an Irish music group who sing a cappella in the style of Sacred Harp, a sacred choral music that originated in the American South of the United States.

Having originated in the South in the late 1700s and early 1800s, the singers are lead not by traditional musical notes but by shapes which represent the different pitches while time is not kept with a formal conductor but through the communal keeping of time as everybody beats their hands.

Spilt into the four parts, the effect of the harmonies is almost religious as the voices soar in this rendition of “47b Idumea”.

The clip shown above, led by Claire Hogan and Irial Ó Ceallaigh, was taken at the second annual convention of Ireland Sacred Heart in Cork in 2012. The convention is still going strong, taking place in March each year and created video after video of ridiculously haunting music.

Here is another other-worldly rendition from the group of “O’Leary” fro this year’s convention:

Sacred Heart singing takes its name from a vitally important tune book in which the notes are written in shape form. The practise was taken up in the US to facilitate congregational and community singing and is seen as a style of notation that is all about groups joining to celebrate the magic of the human voice.

With emphasis placed on participation rather than presented as performance pieces, the singers sit facing inward looking into a hollow square where we can see from these examples, they will be lead somewhat by a fellow singer. All are invited to take turns in leading the gathered singers while they undertake psalm tunes, fuging tunes, odes and anthems by the first American composers, all notated in the Sacred Heart tunebook.

Read more: This Irish a cappella group will give you the chills (VIDEO)

That magic is more than clear from these examples in Cork: