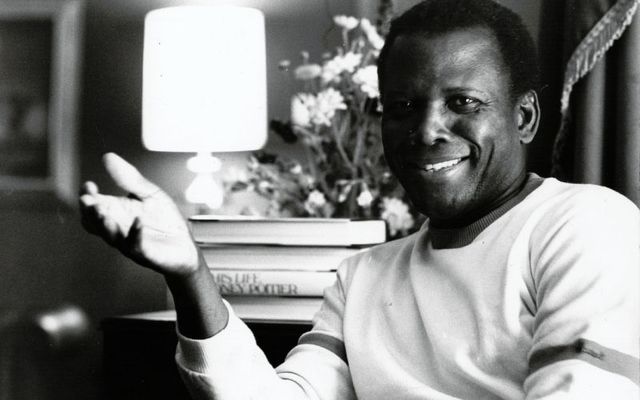 Sidney Poitier died in Los Angeles on January 6 at the age of 94. Getty

In a month marked by sudden deaths -- from comedian Bob Saget to those 19 poor souls in a fire in the Bronx, the death of trailblazing actor Sidney Poitier should not go unnoticed.

Poitier, “whose Academy Award for the 1963 film Lilies of the Field made him the first Black performer to win in the best actor category, rose to prominence when the civil rights movement was beginning to make headway in the United States,” The New York Times noted, adding, “Although often simmering with repressed anger, his characters responded to injustice with quiet determination. They met hatred with reason and forgiveness.”

Before all that, though, before star turns in Hollywood classics like To Sir With Love, In the Heat of the Night and Guess Who’s Coming to Dinner “established him as Hollywood’s first Black matinee idol,” as the Times noted, Poitier played a high school student in a small 1955 movie called Blackboard Jungle.

Poitier was 28 at the time he played New York City high school senior Gregory Miller. So for all of the changes we’ve been through since Blackboard Jungle, it’s good to know some things never change.

His name is Dadier, so he is obviously something of a father figure -- though, these days, folks would have a lot to say about whether or not that in and of itself is offensive.

At first Poitier’s character, clearly a leader, respected by these tough kids, resists Dadier’s efforts to make a connection.

It is only when one of the other students reveals himself to be a murderous psychopath -- not to mention a bigot -- that Miller and Dadier must form a bond to conquer the hateful forces that have invaded their classroom.

In case you don’t quite get the point, an Italian student by the name of “Santini” uses the American flag as a weapon to subdue the violent racists looking to attack Miller and Dadier.

“Santini” was played by a non-Italian actor named Jameel Farah, who would go on to be better known as Jamie Farr in the smash TV show M*A*S*H.

And in a day and age when we know billion-dollar blockbusters are made very carefully so as not to offend certain power brokers in repressive places like China or Russia, you have to give the makers of Blackboard Jungle credit for making a movie -- a successful and influential one, at that -- that would very much have offended more than half of Americans in 1955, living under the repressive laws of Jim Crow and legalized racism.

But it is worth noting that the psychopathic bigot in Blackboard Jungle is one Artie West, very clearly identified by Dadier as “Irish American.” Which in and of itself only gives Blackboard Jungle a more realistic, polyglot feel.

The problem is that we are now over 175 years into “message” stories that tend to prop up Irish Americans as backward, a “problem.” Almost, to be blunt, as if they simply can’t be good Americans, just like snooty Protestants said at the time of the Famine.

What do we do when the people being punched down at, start punching down themselves?

Look at the long, sordid history of, say, South Boston, from the heinous crimes of Whitey Bulger, right up through the backlash over school segregation and bussing.

One of many, many movies that explores suffocating, oppressive Irish environments like this is a 2011 movie called Black Irish, starring Brendan Gleeson and Melissa Leo.