Shannen Doherty posted unfiltered images of her breast cancer treatment, including a jarring image of her completely bald with a bloody piece of cotton wool in her nose. 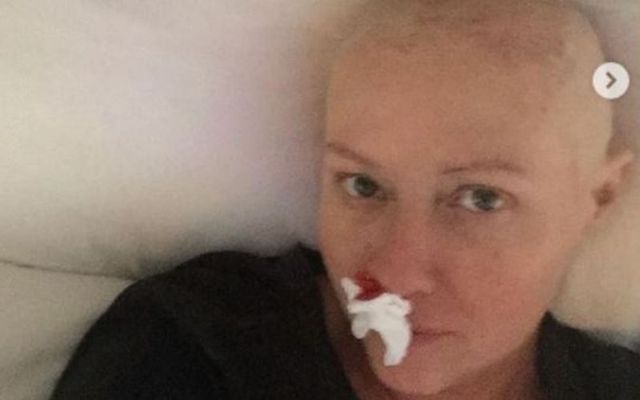 Irish American actress Shannen Doherty has posted a series of jarring images from her chemotherapy treatment as part of Breast Cancer Awareness Month to encourage people to get regular breast checks.

Doherty, who played Brenda Walsh in the hit '90s show Beverly Hills 90210, was diagnosed with breast cancer in 2015 and has undergone a mastectomy in addition to radiation and chemotherapy treatment.

The actress recently posted unfiltered images of her cancer treatment, including a jarring image of her completely bald with a bloody piece of cotton wool in her nose.

Doherty said that she hopes the post inspires people to get themselves tested if they feel like something is wrong.

"Is it all pretty? NO but it’s truthful and my hope in sharing is that we all become more educated, more familiar with what cancer looks like," the actress wrote on Instagram.

"I hope I encourage people to get mammograms, to get regular checkups, to cut thru the fear and face whatever might be in front of you.

Doherty explained that she often suffered nosebleeds after undergoing chemotherapy and said that she was often "beyond tired".

She said that she used to dress up in "funny pajamas" to cheer herself up and posted an image of her lying in bed in Cookie Monster pajamas and a Cookie Monster eyemask.

"Did they actually cheer me up? Yes!! Lol. I looked ridiculous and in that ridiculousness, I was able to laugh at myself. Finding humor helped get me thru what seemed impossible. I hope we all find humor in the impossible."

Kearston Wesner, who teaches celebrity culture and media studies at Quinnipiac University in Connecticut, told the New York Times that the images are likely to resonate with the general public.

"The photos aren’t touched up," Wesner told the New York Times. "They’re not presented in any way than the reality she’s going through. There is some feeling that when she is communicating with you, she is coming from an authentic place."