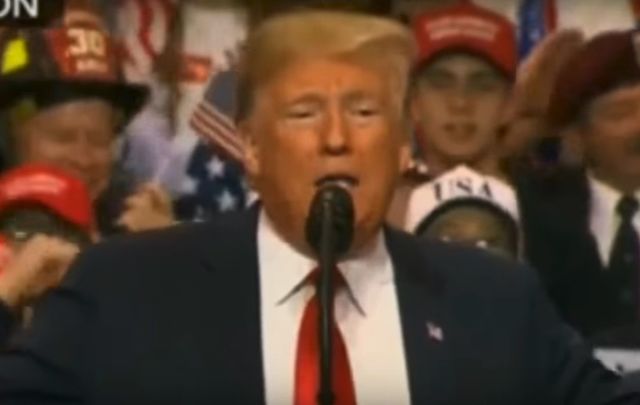 Donald Trump exclaiming "She has no Indian blood!" CBS / YouTube

It’s no surprise that Stephen Colbert took a swing at President Donald Trump’s campaigning ahead of the Midterm Elections but his comments about the 1800s Irish immigrants to the United States came as a little bit of a surprise to this IrishCentral crew.

Colbert, the host of the CBS “Late Show with Stephen Colbert”, who is himself 94% Irish, was speaking about President Trump’s appearance while rallying in Cleveland and speaking about the Democratic candidate for governor. Trump’s clip ended with him, once again, commented on Democrat Elizabeth Warren’s lack of “Indian blood”.

He shouted, “She has no Indian blood!”

Read more: Win or lose Beto O’Rourke is the new Obama for Democrats

His comments were clearly making reference to Trump’s reaction to the caravan of thousands of refugees walking north through Central America to seek asylum in the United States. Despite the fact that they will not arrive at the US border for, possibly weeks, Trump has already sent the US army to great them.

You can tune it at 4.47 to hear this particular bit. Here’s the monologue in full:

Read more: Did you know that Stephen Colbert is 94% Irish?

Are you monitoring the Midterm Election results? How do you think it’ll go? Let us know in the comments section below.