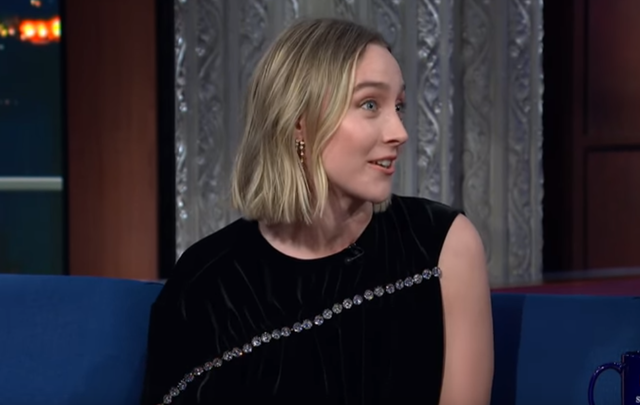 Saoirse Ronan asked Stephen Colbert for a cup of tea on The Late Show, while promoting Little Women.

Golden Globe-nominated star of the new movie, Little Women, Saoirse Ronan appeared on The Late Show last night and like a typical Irish woman complained about the cold, but she did get a cup of tea.

Saoirse Ronan is on the publicity trail for her new movie Little Women, also starring Emma Watson and Timothée Chalamet. On Tuesday night she stopped by The Late Show with Stephen Colbert and the first thing she did was complain that the studio was cold and request a cup of tea. How Irish can you get!

Brilliantly, Colbert (who has strong Irish roots himself) followed through and lo-and-behold the Irish Hollywood star got her cuppa to warm her up. Sadly, whatever kind soul brewed the tea didn't add milk. A cardinal sin, for some, when it comes to tea making.

Ronan, who was born in the Bronx but raised by her Irish parents in County Carlow also spoke about Little Women. Confessing how good it was to have a chance to break Timothée Chalamet's heart after his character in Lady Bird broke her heart.

She also spoke about the movie and she said that it was great that she got the chance to break Timothée Chalamet's heart after he broke the heart of her characters in their previous move Lady Bird.

Saoirse Ronan’s character in “Little Women,” Jo March, stars opposite Timothée Chalamet’s Laurie, and she was happy to have a chance to break his heart after he broke hers in “Lady Bird.”

The nominations for the 2020 Golden Globe Awards were announced on Tuesday. This is the fourth time Saoirse Ronan has been nominated. In 2018, she won a Golden Globe for her role in Lady Bird. She's also been nominated for an Oscar three times.

What do you think? Could this be Saoirse Ronan's year? Will she win big? Let us know in the comments section below.

Read more: Chris Evans' Irish Aran sweater in "Knives Out" goes viral and we love it