Dublin feels the love for the Rolling Stones as Mick Jagger shows he still has the moves during first gig of European "No Filter" tour. 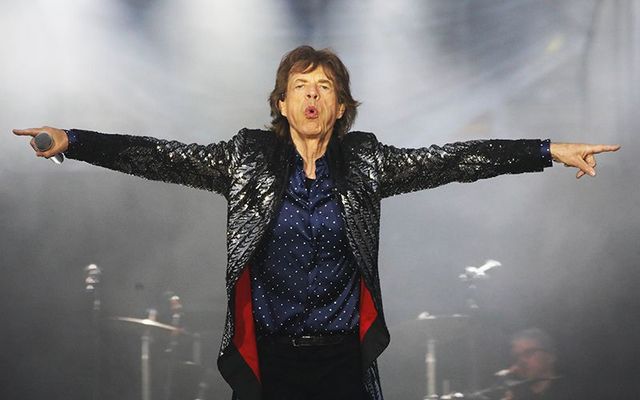 Dublin feels the love for the Rolling Stones as Mick Jagger shows he still has the moves during first gig of European "No Filter" tour.

The Rolling Stones played to a crowd of 7,000+ at Croke Park, in Dublin, kicking off their first UK tour in 12 years. The band, who have a combined age of 293, will now jet off to London to play the next leg of their “No Filter” tour next Tuesday.

Backstage on Thursday Ronnie Woods (70) created a poster of the May 17th gig’s playlist, at Croke Park, illustrated with famous Rolling Stones logo in the Irish flag colors.

Read more: How David Bowie, Phil Lynott and The Dubliners spent their time in Dublin

Mick Jagger (74) charmed the Dublin fans on Thursday with his signature eccentric dance showing he still has the moves. His attire for the event, a stunning sequined long suit jacket, shimmered during the performance.

The fans showed their love on social media:

So, who was at the #RollingStones last night? What did you think?

The Stones’ - Mick Jagger, Ronnie Woods, Keith Richards (74) and Charlie Watts (76) – latest tour will see them play at Old Trafford Stadium in Manchester, Murrayfield Stadium in Edinburgh, the Principality Stadium in Cardiff and London's Twickenham Stadium. They’ll then go on to Berlin, Marseille, Stuttgart, Prague and Warsaw to finish off their European tour.

“It's always exhilarating going to cities we haven’t played for quite a while — and also some new venues for us like Old Trafford and The London Stadium.”

Although The Stones have a combined age of 293 it seems that the band is still rearing to go. Although this is the first UK gig in 12 years they headlined Glastonbury five years ago.

Speaking to Music Week, the  Stones’ manager Joyce Smyth said “When you want to keep going, you keep going.

“There is no reverse gear for this band, it’s onwards and upwards and pushing forwards the whole time.”

It’s plain to see that the Irish fans were chuffed after the Stones show last night.

The epitome of living the dream of teenagers wanting to do something they love for the rest of their lives. They started playing the blues in the early 60s, and haven’t stopped. Whatever you think about the music, they have lived that dream. #rollingstones

Would you go to see the Rolling Stones live? What your favorite Stones song? Let us know below.