Trump and JFK: who is the better painter? Auction will decide

Artwork created by President Trump and the late President John F Kennedy will be up for auction on Dec. 2. 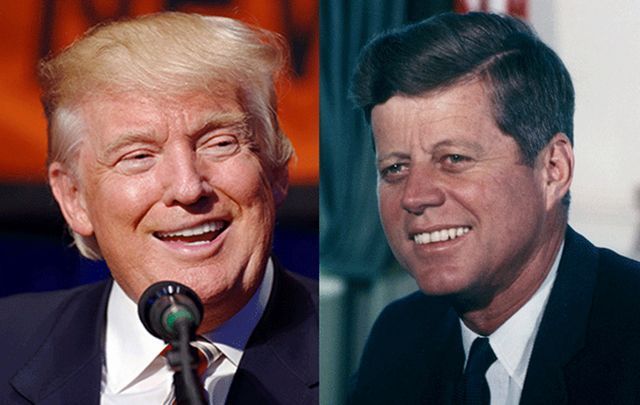 Original artwork created by President Donald Trump and the late President John F Kennedy will be up for auction at the Heritage Auctions’ Americana & Political Memorabilia auction in Dallas on Dec. 2.

Trump’s piece is a signed, multi-colored doodle of the NYC skyline and yellow cabs dating from 2005. The piece had been donated to the St Francis Food Pantries and Shelters organization in New York.

Read More: JFK's rosary beads were priced at $400,000 - you'll be surprised what happened at the auction

The slightly more sophisticated work from Kennedy – an original oil painting from 1955 signed by the 35th president – is expected to sell for far more. The artwork, which once hung in Robert F Kennedy’s Hickory Hill home (McLean, VA), is expected to fetch around $50,000. The painting depicts the skyline of a town, possibly in the South of France. It is thought to be one of two known paintings by JFK. His other work is at the Kennedy Library in Boston.

The Kennedy piece was consigned for auction by Victoria Gifford Kennedy, widow of Robert and Ethel Kennedy's son Michael. The painting comes with a note from Ethel to her daughter-in-law that reads:

"I'm delighted that 25 years later you're still enjoying President Kennedy's painting which I gave to you and Michael for your wedding.

"I believe it is a scene from the South of France which he gave to Bobby and me for Christmas at Gramma's in Palm Beach.

"For years it hung in our room at Hickory Hill."

Also accompanying the painting is a black-and-white photograph of JFK working at an easel, with Jackie looking over his shoulder.

Tell us, if money were no object, which piece would you buy?