JFK's rosary beads were priced at $400,000 - you'll be surprised what happened at the auction

A Cartier Tank watch owned by Jackie sold for $379,500, purportedly to Kim Kardashian. 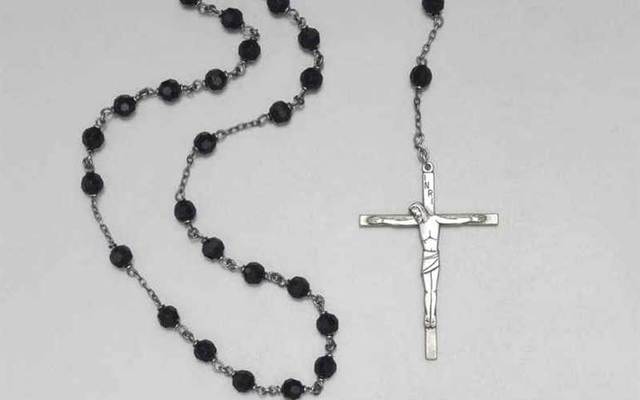 Rosary beads once owned by John F Kennedy and valued at up to $400,00 failed to sell at auction in New York last month. Despite a renewed interest in mementoes associated with the late president, especially now during the centenary year of his birth, bidders seemed to have baulked at the rosary’s steep estimate.

The onyx and silver rosary, which has a silver crucifix with “John F Kennedy” engraved on the reverse, is described by Christie’s as “one of the most important and personal possessions” of America’s first Catholic president, with “impeccable providence,” having been later given by Kennedy “to his best friend and special assistant, David Powers.”

Powers, an Irish-American whose parents emigrated from Co Cork, was a friend of JFK’s since the 1940s. In 1961, he was appointed to the White House staff. Powers accompanied the president on his visit to Ireland in June 1963, and was in the motorcade in Dallas when JFK was assassinated. He later became the first curator of the John F Kennedy Presidential Library and Museum in Washington DC.

Powers died in 1998 at 85. Following his death, Powers’ family found a hidden cache of mementoes from his time with JFK. Some of these items were sold in auction in 2013 including an Air Force One leather bomber jacket worn by JFK that sold $570,00, and a photo of the presidential motorcade on Dublin’s O’Connell Street, dated June 26th, 1963 signed, and inscribed by JFK, that sold for $12,650. At that time, Powers’ family sold the rosary for an undisclosed sum to an unnamed private collector. Four years later, the anonymous seller has consigned it to Christie’s.

However, the rosary is not unique. The Kennedy Homestead at Dunganstown, New Ross, Co Wexford has a set of rosary beads in its museum that was reputedly in John F. Kennedy’s pocket the day he died.

While the rosary did not sell, an 18-carat gold Cartier Tank watch owned by the late Jacqueline Kennedy Onassis did sell at auction last month for $379,500, way above the estimate ($60,000-$120,000). Christie’s said the sale price was a new world record for a Cartier Tank.

Although the auction house did not reveal the name of the buyer, unconfirmed media reports have claimed that the anonymous bidder was Kim Kardashian.

The watch was given to Jackie in 1963 by her brother-in-law Prince Stanislaw “Stas” Radziwell,

The watch is engraved “Stas to Jackie 23 Feb. 63 2:05 am to 9:35 pm,” referring to the start and stop times of the famous “50-Mile-Hike” in Palm Beach in 1963. The watch, along with an original painting that Jackie made in 1963 as a gift for Stas Radziwill celebrating the hike, ws sold by the Radziwill family. Some of the proceeds of the sale will be donated to the National Endowment of the Arts.

Christie’s described the watch and the accompanying painting as “two of the most important historic artifacts to surface in recent years from the golden era of the Kennedy presidency.”