Described as a "darkly comedic thriller", Bodkin will follow a "motley crew of podcasters" as they attempt to investigate three disappearances in an "idyllic Irish coastal town". 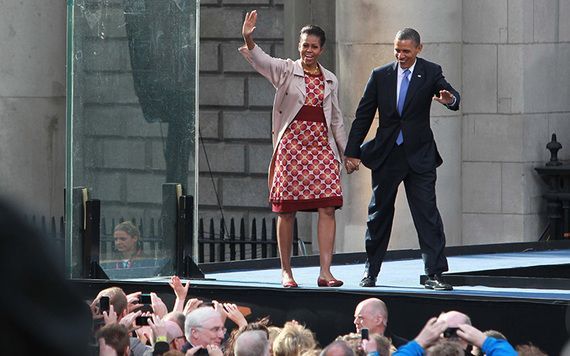 Barack and Michelle Obama during their visit to Ireland in 2011. Rolling News

A new Netflix series set in West Cork and produced by Barack and Michelle Obama is set to begin filming next week, according to reports.

Described as a "darkly comedic thriller", Bodkin will follow a "motley crew of podcasters" as they attempt to investigate three disappearances in an "idyllic Irish coastal town".

The series stars Saturday Night Live comedian Will Forte as an American podcaster "on the hunt for his next big story" while also attempting to "discover his Irish roots".

Power also criticized the fact that Bodkin was the name of the "idyllic Irish coastal town" and questioned whether who is involved in the series has ever been to Cork.

"Bodkin sounds like a lot of things. A Hobbit on the sex offenders’ register. A forthcoming Nintendo Switch platform game. A brand of English cider. What it doesn’t suggest is a village in west Co Cork," Power quipped in a recent column.

Power questioned whether the upcoming series would be "a love letter to West Cork" or if the Obamas would contribute to the "world of O'Blarney", adding that viewers should hope for the best but prepare themselves for the "diddley-dee worst".

West Cork has proved a popular filming ground for both fiction and non-fiction crime projects over the past 12 months, with two separate documentaries exploring the murder of Sophie Toscan du Plantier released in 2021 in addition to ITV's adaptation of Graham Norton's "Holding", which centers around a fictional cold case killing in the 1990s.

The series represents new ground for the Obamas, who have previously focused on non-fiction projects with their Higher Ground production company.

The former US President recently appeared in the natural-history documentary "Our Great National Parks", while Michelle Obama recently hosted "Waffles + Mochi", appearing alongside a sentient Japanese rice cake and a talking waffle.