"Scéalta na gCorn" will tour GAA clubs and county stadiums throughout Ireland as she learns the stories behind some of Ireland's lesser-known trophies and cups. 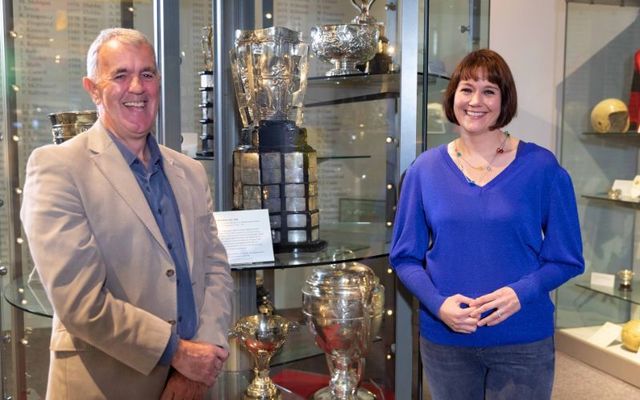 A new six-part documentary exploring the stories of more than 2,000 pieces of GAA silverware in Ireland is set to air on Irish-language channel TG4 later this month.

"Scéalta na gCorn" will take presenter Gráinne McElwain to GAA clubs and county stadiums throughout Ireland as she learns the stories behind some of Ireland's lesser-known trophies and cups.

McElwain will learn about how cups came into existence and the stories behind their names.

Many pieces of GAA silverware are named after Irish revolutionaries such as Roger Casement and Terence MacSwiney, the former Lord Mayor of Cork who died on hunger strike during the Irish War of Independence.

Other pieces of silverware, meanwhile, are named after members of the clergy or prominent GAA administrators who played an important role in the development of the GAA around Ireland or at a grassroots level.

McElwain travels to Dublin in the first episode of the six-part series to learn about Ireland's oldest piece of GAA silverware - the Silvermines Cup. She also visits Dublin GAA club Faugh's to learn about the Tommy Moore Cup, a renowned trophy named after the well-known publican who had a profound impact on the development of hurling.

No trip to the capital would be complete without a visit to GAA Headquarters at Croke Park, where she visits the two most famous pieces of silverware in Ireland - the Sam Maguire and Liam McCarthy cups, which are presented to the winners of the Gaelic football and hurling All-Ireland championships respectively.

McElwain will pay visits to GAA strongholds in Monaghan, Antrim, Donegal, Galway, and Cork in the remaining five episodes of the series, which debuts on TG4 at 8:30 p.m. on Wednesday, September 14.

New episodes of the series will be released every Wednesday thereafter.

Check out the trailer for "Scéalta na gCorn":