Is Maureen O’Hara’s Miracle on 34th Street the greatest Christmas movie ever? 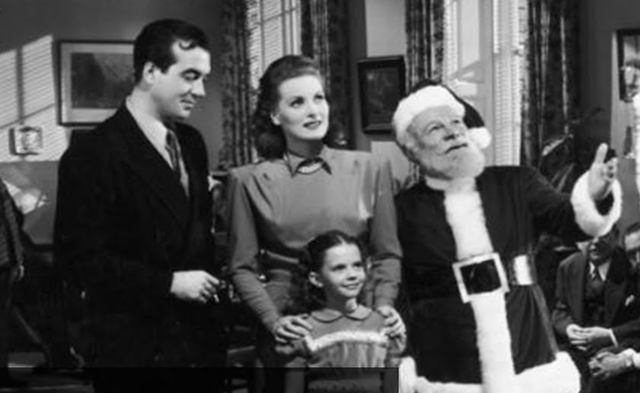 While in her prime as the Queen of Technicolor, Irish actress Maureen O’Hara was in one of the greatest Christmas movies ever made.

It was when watching the 1994 remake of Miracle on 34th Street that I truly fell in love with the enormity that is the holiday season and Christmas in America and in New York, in particular.

Now lucky enough to work right alongside Macy’s where much of the action is set, the arrival of each Christmas reminds me of the joy as a young girl of flicking over the TV stations in December to discover a young girl just like me on the screen fighting for the right of Kris Kringle to be identified as Santa Claus.

Released at a time when divorce is not as common or as accepted as it is now, the very fact that O’Hara’s character Doris Walker is not only a divorced woman but a highly successful divorced woman, holding her own among her male colleagues with no question of her ability, is just one of the reasons why this could have been one of the most feminist movies made at the time.

Be reminded that just five years later in 1952, O’Hara was being dragged across a field by John Wayne in The Quiet Man and shown in a poster for the movie McLintock! flung over the same co-star's knee as he hits her in 1963 and you’ll have enough context to understand what a remarkable feat this is for “Miracle on 34th Street.”

With a 96% approval rating on Rotten Tomatoes, the strong female leads are “irrefutable proof that gentle sentimentalism can be the chief ingredient in a wonderful film,” according to the site.

“Miracle on 34th Street delivers a warm holiday message without resorting to treacle.”

And this is because while the film’s main character, eight-year-old Susan Walker, played by Natalie Wood, is very much a young girl, she’s allowed to be smart and savvy and very much cynical, something that's very special to see during an era when little girls were very much still expected to be sugar and spice and everything nice.

It is she who has to be convinced that Kris Kringle is, in fact, Father Christmas (played by Edmund Gwenn who won an Academy Award for Best Supporting Actor for his spin at St. Nick) and while the movie is still full of magic and wonder and the sentimentality that we generally associate with Christmas movies, it’s also one that never steps too very far from reality, never 100% confirming if they have discovered the real Santa Claus or not.

While many of us now dread the thought of holiday shopping and ensuring you have the perfect gift for all your loved ones, Miracle on 34th Street also holds a gentle anti-commercial message with Kris Kringle steering people to the places where they can find the cheapest toys and showing in its finale that the greatest presents really are the ones that can not be purchased.

What is your favorite Christmas movie? Does Miracle on 34th Street feature on the list? Let us know in the comments section.