Damon, a native of Massachusetts, is very familiar with his home state’s Irish community and heritage and has said in interviews as far back to 2014 that he wanted to portray Robert F. Kennedy in a movie. 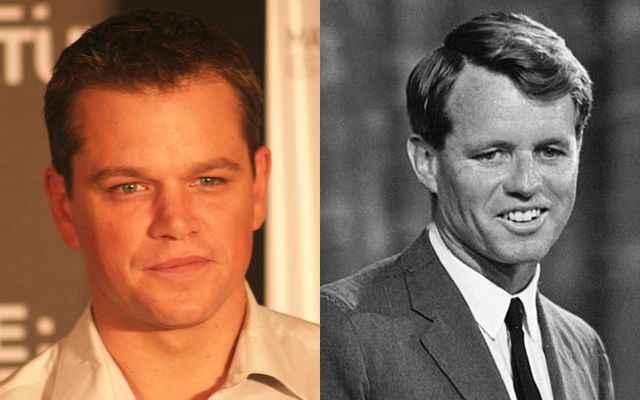 Director Nikolaj Arcel, who helmed the forthcoming Stephen King supernatural tale Dark Tower, has reportedly signed on to direct Damon in the sure to be controversial new flick.

According to Variety, Arcel will direct from a script that he co-wrote, and Damon will help produce. Filming is expected to start next year. If it goes ahead, it will be the first time Damon plays a real life non-fiction character on the big screen.

In 2014, Damon told CNBC: “If they could figure out a way to do Bobby Kennedy, I would love to do that. I just love that guy, and the incredible things he was saying at the end of his life. He’s a really interesting figure but it’s just so hard to do those biopics without them being cumbersome. It’s very difficult to put his story into two hours.”

Robert Kennedy ran his brother John’s successful 1960 presidential campaign and later served as Attorney General (and most trusted adviser) to his brother between 1961 and 1963.

For several months after his brother’s assassination he remained in the post for President Lyndon B. Johnson, ultimately resigning to run for the U.S. Senate, representing New York.

Kennedy served until his own assassination by Sirhan Sirhan in June 1968, having secured the Democratic presidential nomination on a platform of ending U.S. involvement in the Vietnam War.

Like his brother, he has since become an iconic face of a time and place in American history.

Arcel, the Danish-born director, made his name in 2009 as the screenwriter of the original “Girl With the Dragon Tattoo”. He later wrote and directed “A Royal Affair” starring Alicia Vikander, which was nominated for best foreign-language film at the Academy Awards.

Damon, a native of Massachusetts, is very familiar with his home state’s Irish community and heritage and has said in interviews as far back to 2014 that he wanted to portray Robert F. Kennedy in a movie.

No release date has been set yet, but with its lead, director, and subject, it already sounds like Oscar bait of the first order.