Matt Damon arrived in medieval clothes in Cahir, Co Tipperary to shoot a scene for The Last Duel. 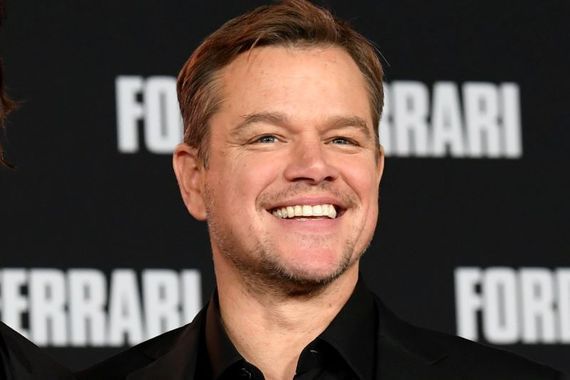 Matt Damon has been in Ireland since the end of August. Getty Images

Matt Damon was spotted greeting fans as he arrived at an old castle in County Tipperary to film a scene from his upcoming movie, "The Last Duel", on Wednesday morning.

Emma Twomey, a 23-year-old fan from County Cork, filmed Damon dressed in medieval clothes arriving at the film set in Cahir, Tipperary, and uploaded the video to Tiktok.

Twomey was among around 30 enthusiastic fans eagerly awaiting Damon's arrival and she told the Irish Mirror that the American actor did not disappoint.

"Matt was lovely, he engages with people as he walks by and always smiles and waves."

Twomey also recorded a number of other film stars as they arrived at the set, including Adam Driver and Jodie Comer.

She also recorded as the film crew wheeled a wagon through the Tipperary town.

Twomey told the Mirror that she spoke to a number of workers at the set in Cahir and said that they had nothing but good things to say about the famous film star who has endeared himself to the Irish nation.

"We were speaking to a few workers and everyone who had spoken to Matt had said that he is so lovely and so down to earth and you can see that by the way he engages with crowds," she said.

Damon became an extremely popular figure in Ireland during the early stages of the COVID-19 lockdown when he decided to remain in Ireland rather than return to the United States when filming was suspended.

He was frequently spotted out walking or running on Killiney Hill and he regularly posed for pictures with admiring fans.

Then, on Easter Weekend, Damon went viral when he was spotted holding a SuperValu bag full of swimming gear as he prepared to go swimming near Killiney in Dublin.

He described his six-week stint in Ireland during COVID-19 lockdown as a "fairytale" and returned to Ireland in August to complete the filming of "The Last Duel", which is expected to be released in late 2021.