Colin Farrell is the latest celebrity to appear on a segment of Aidan’s Magic Corner with Irish kid magician Aidan McCann. 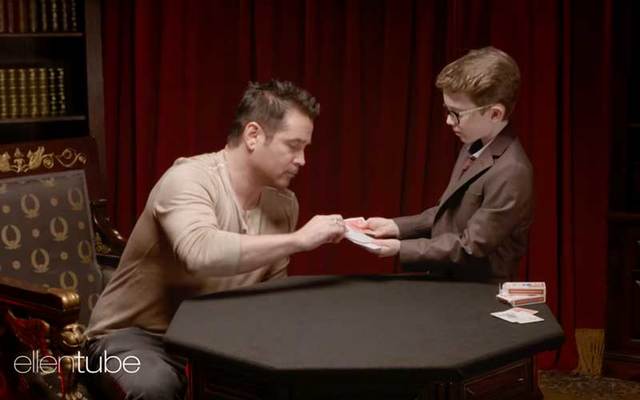 Colin Farrell is the latest celebrity to appear on a segment of Aidan’s Magic Corner with Irish kid magician Aidan McCann.

The 10-year-old Co Kildare illusionist, who hosts the digital series on Ellen Degeneres’ Ellen Tube, impressed Farrell with his card tricks and a few Irish-related questions.

McCann asked the 43-year-old actor to pick a card and even teased him about his “weak” card shuffling.

“That was a choice,” laughed Farrell.

Farrell is stunned when McCann pulls off two unbelievable card tricks in a row.

At the end of the segment, the Irish star was so impressed he asked McCann’s mom to let him know the next time he’s in town so he can go see the young magician perform.

Other celebrities that have appeared on the Aidan's Magic Corner segments include the Jonas Brothers and Emily Blunt.

Watch the latest segment with Colin Farrell below: