The Olympic gold medal winner will take to the ring for her sixth professional fight, after five amazing wins since turning pro last November. 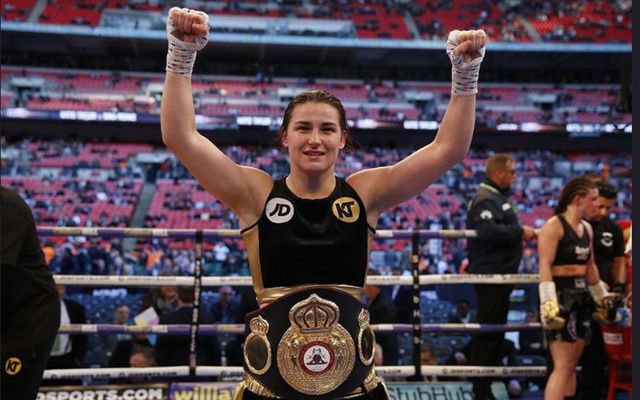 Olympic champion Irish boxer Katie Taylor will make her US professional debut later this month in the Barclays Center in Brooklyn.

The Irish lightweight, regarded as one of the most popular figures in women’s boxing and one of the most high profile people in Irish sport, will head into the ring against a to-be-determined opponent this Saturday, July 29, for her sixth professional fight. Taylor will be on the undercard of a junior welterweight showdown between Adrien Broner and Mikey Garcia.

Winning an Olympic gold medal in 2012, the 31-year-old from Co. Wicklow turned professional last November after crashing out in the quarter-final of the Brazil Olympics in 2016. So far she has won all five of her first professional fights, winning by a knockout in three. All of her fights have so far been in England, however, and Taylor, who trains in Connecticut, is said to be pleased to finally make her American debut.

“I’m really excited about boxing in the US because I’ve been training in Connecticut for all my fights to date," Taylor told RTÉ News.

"It’s great now to actually have a fight over here and especially on such a big card.

"The Barclays Center is a fantastic arena. I was there to see the DeGale v Jack fight in January, that was a great fight and the Broner v Garcia fight is another terrific match-up so it’s brilliant to get the opportunity to be part of that event."

Although the Brooklyn match-up will not be shown on TV, an agreement was reached to include the five-time amateur world champion on the card for an eight-round bout with thanks to a deal between Taylor promoter Eddie Hearn of Matchroom Boxing and Lou DiBella, who is promoting the card.

"She joins five-time, five-weight-division Puerto Rican world champion Amanda Serrano and U.S. star Heather Hardy in continuing our commitment to include the best women on the best cards at Barclays Center.

"While Katie will appear on the international telecast, the local Irish community and U.S.-based fans will need to join us at Barclays Center on July 29 to see her in action."

"I'm so pleased to see Katie make her American debut on such an outstanding card," Hearn said in a press release.

"I believe Katie is the most entertaining and dangerous fighter in women's boxing and has already lit up many venues in her professional journey, most recently Wembley Stadium on the [Anthony] Joshua vs [Wladimir] Klitschko card in front of 90,000 [on April 29].

“She is one of the biggest stars in Ireland and we are expecting fantastic support from the Irish community on the East Coast for her first U.S. experience."

The card on July 29 will also feature another Irish welterweight prospect as New York-based 22-year-old Noel Murphy (10-0, 2 KOs) will take to the Barclay Center to entertain the Irish crowds in Brooklyn.