"Wolfwalkers" is competing with Pixar's "Soul" for the Best Animated Feature at the 93rd Academy Awards on Sunday night. 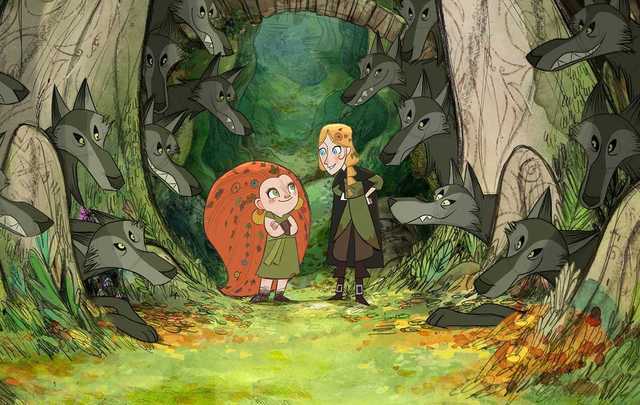 Irish animated film "Wolfwalkers" has been tipped as an outside bet for the Best Animated Feature at this year's Academy Awards.

Directed by Tomm Moore and Ross Stewart and produced by the Cartoon Saloon studio in Kilkenny, "Wolfwalkers" has been gaining momentum in the run-up to the 93rd Academy Awards on Sunday evening.

The film follows a young apprentice hunter and her father who travel to 17th-century Ireland to wipe out the country's last remaining wolfpack, only for the young girl to befriend a free-spirited girl from a mysterious tribe who are rumored to transform into wolves by night.

"Wolfwalkers" has received widespread critical acclaim and has been shortlisted for Best Animated Feature alongside "Onward", "A Shaun the Sheep Movie: Farmageddon", "Over the Moon", and the heavily-fancied Pixar entry "Soul".

Pixar's latest animated feature is the clear favorite to pick up the Oscar for Best Animated Feature on Sunday night, but pundits from Ireland, Britain, and America say that "Wolfwalkers" is the more deserving winner and believe that it has an outside chance of causing an upset.

Kyle Buchanan of the New York Times said that the film "had plenty of support" in Hollywood, although he noted that "Soul" was almost certain to win the Oscar given Pixar's continued success at the Academy Awards.

Nicholas Barber and Caryn James of the BBC, meanwhile, both believe that "Wolfwalkers" is the worthy winner this year but agree that "Soul" is likely to pick up the award.

However, Barber and James both think that the Irish film has a decent chance of upsetting the odds.

" Wolfwalkers deserves to win: every stylized, hand-drawn frame of this Irish fairy-tale adventure is a work of art. Put them together and you've got one of last year's most delightful films, animated or otherwise. Wolfwalkers might just clinch it," Barber said.

"With gloriously colourful visuals as delicate as stained glass, it breathes a contemporary feel into a young heroine in 17th-Century Ireland," James said.

"The Wonderful Wolfwalkers has been gathering strong momentum in recent weeks and could make history for Irish animation if enough wind gets behind it," McCarthy said.

"Soul" has already pipped "Wolfwalkers" at the Golden Globes earlier this year and it is unlikely that the Irish film has generated enough support to win the biggest prize of all on Sunday. One thing is clear, however; "Wolfwalkers" has proved to be a huge hit with critics around the world and is one of the finest films to come out of Ireland in recent years.