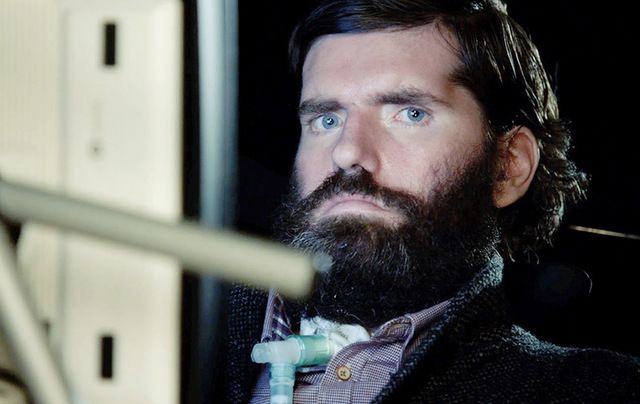 Colin Farrell narrates 'It’s Not Yet Dark,' the spare and profoundly moving new Irish documentary about Simon Fitzmaurice, the young Dublin film director cruelly stricken with Motor Neuron Disease just as his brilliant career is taking flight. Cahir O’Doherty calls it the Irish documentary film of the year, if not the decade.

In 2008, when director Simon Fitzmaurice was being feted as an emerging talent at the Sundance Film Festival, something started to go wrong.

Stepping out into the street after the screening, he was so relieved and happy about the film’s reception he felt like he was floating.  The work he loved making was being greeted with rapture. He was 34.

Outside it was snowing heavily and he felt quietly elated, but something also felt a little off.  He had noticed a pain in his foot that wouldn’t go away.

When he called his parents in Ireland to celebrate the film’s reception later he almost forgot to mention it to them. At the time, they all just passed it off as one of those things, exactly in the way people do, until you discover it isn’t.

Exactly at the moment when his talent was showing its early promise, he was succumbing to the condition called Motor Neuron Disease, and a near total paralysis that would eventually rob him of his mobility if not his dreams.

What makes 'It’s Not Yet Dark,' the documentary about Fitzmaurice’s journey, so riveting is the uncompromising honesty with which Fitzmaurice speaks. Nothing is sugar-coated, no punches are pulled, until what emerges is an unforgettable portrait of a loving Irish family facing into an unimaginable crisis and refusing to be broken by it.

“I knew there was something wrong, but you never guess it’s something as catastrophic as MND,” his wife Ruth confesses to camera. “How does anyone respond to being told you have three to four years to live?”

It’s a good question. “I had a different life before death stood beside me,” Colin Farrell narrates in Fitzmaurice’s words in the film’s opening moments. “There is nothing romantic about death. It is terror.”

As Farrell narrates we see vivid images of Fitzmaurice as he was, walking, talking, eating, drinking, dancing – handsome and confident, popular with the ladies and the life of every party.  He is entirely unaware of what’s coming for him.

Then the camera jump cuts to him now, immobile in a wheel chair, unable to even breathe now without the aid of a respirator. He’s still himself, still able to feel everything, but unable to move.

What’s new about him is the hawk-like concentration in his grey blue eyes.  They’re the only part of his body that he can still move, and perhaps for that very reason they have achieved a lighthouse intensity. They are the eyes of a man who is stripped of all illusion. They are also the eyes of a fighter.

Grey blue eyes of a fighter

In the first days after his diagnosis Fitzmaurice pursues every avenue that he can, seeking out experimental therapies and even help from the kind of backwoods mystic healers that live in caravans on blocks down deserted country highways.

Nothing works. As the months progress he becomes increasingly incapacitated.

She is resolute, however. They will fight this.

Simon Fitzmaurice and his wife Ruth.

When it became clear that they were counting the days, waiting for the axe to drop, Ruth did something that Fitzmaurice at first resisted. She insisted that he and their three young boys all visit their friends in Australia for a family getaway before, she says, “we all go mad here.”

Far from the health disaster that her husband had anticipated, it turned out to be one of the richest adventures of their lives. Fitzmaurice still had mobility; his three boys were having the time of their lives and his relationship with his wife deepened as they faced into the future together. They discovered they both had the steel they would need to face the coming uncertainty.

“It’s so gradual. At each stage, you mourn the loss (of some new part of the man she married), then you move on,” she says, “and you’re stunned to discover it hasn’t broken you.”

When you’re told you will die within a certain period your life slows down, Fitzmaurice says.  Things that once seemed important fall away.

You keep it at the back of your mind, and you take it everywhere you go, the basic fact of your own mortality, the film reminds us. Yours and everyone you know.

Usually you file it in a box marked Open Later. If you’re lucky, you’ll rarely have to think about it. Fitzmaurice wasn’t lucky.

As his body atrophies and his condition gets worse, he turns to the work that has captivated him like no other in his life, film making. Writing 'My Name Is Emily,' his feature length screenplay starring 'Harry Potter’s' Evanna Lynch, and even story-boarding it with the aid of computer software that is guided by his eyes, he pursues his dreams undaunted.

The sheer focus and determination with which Fitzmaurice pursues his dream is powerfully inspirational.  He quite literally refuses to say die. Each day he wisecracks, mocks, accesses the playful Irish part of himself that the disease cannot rob him of.

What keeps him going, the film shows us, is love. After a serious respiratory failure, his doctor offers him the chance to pass away peacefully, but Fitzmaurice declines it. Instead he quotes a scene from the classic film 'The Princess Bride,' when the near death romantic hero Westley is asked what he has left to live for and he simply sputters, “True love.”

Fitzmaurice’s wife, his children, his family and friends are worth fighting for, and so fight he will, he says. Watching him, and hearing his resolve, you can’t fail to be moved by his utter determination.

When asked what’s the best part of living with the disease he replies, “The living part.” That’s the kind of disarming frankness that makes 'It’s Not Yet Dark' a tough watch at times, but the film rewards your patience with a portrait of the human spirit battling impossible odds and frequently succeeding.

Boasting a rare and coveted 100 Percent Fresh rating on the critical composite site Rotten Tomatoes, 'It’s Not Yet Dark' simply disarms everyone who sees it with its urgency and its stark poetry (the film is in part based on the bestselling autobiography of the same name, based on Fitzmaurice’s book about his life changing journey).

In scene after scene first time feature director Frankie Felton creates a vivid portrait that lingers in the memory long after the screening.

But it’s Fitzmaurice’s steely gaze that you will return to, as he contemplates where he was and where he is now, and how much he wants to stay.

'It’s Not Yet Dark' is now available on iTunes, Amazon and Google Play. It will open in Ireland on October 13.

Here’s a short film on the inspiring Simon Fitzmaurice: