The Emily Blunt and Jamie Dornan rom-com is getting released in Ireland... finally. But what will the Irish make of it? The stars couldn't care less. 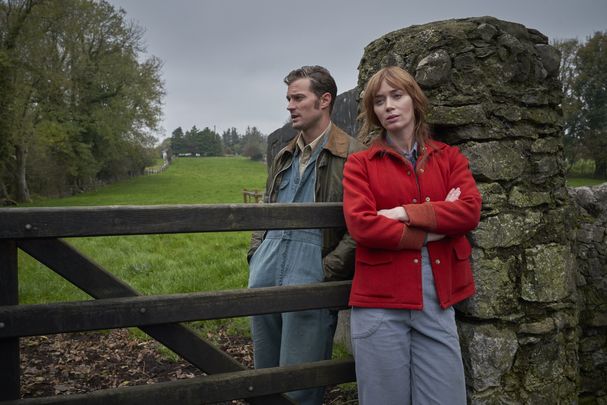 Remember Wild Mountain Thyme, the cheesy Irish rom-com starring Emily Blunt and Jamie Dornan that was released in the United States last December? Well, finally the Irish public will have the chance to see the film which did its darndest to push Ireland back into the days of begorrah and top of the mornin’ to ya.

Wild Mountain Thyme will be available on-demand in Ireland starting April 30.  The release plan from distributor Lionsgate originally called for the film to debut in the U.K. only, with a summer release planned for Irish cinemas, but given that Ireland is on lockdown with no timeline for the reopening of theaters, the 30th is the day when the Irish can see their country mauled on screen in exchange for a few euros.

In fairness, the countryside looks gorgeous, but man, those accents from the leads are hard on the ears and some of the dialogue from Oscar winner John Patrick Shanley is cringe.

Belfast-born Jamie Dornan – his pivot to southern twang didn’t go so well – and Emily talked to Sky News last week about the ongoing razzing about their Irish accents.  Neither really gives a hoot.

"It's kind of par for the course. I'm from Ireland and we're known for taking the p*** pretty much out of everything -- it almost comes with the territory," said Dornan. "I think that's fine, and at the end of the day, everyone's going to have their opinion. We are doing the accents that we planned to do."

Blunt, a native of London added, "Luckily, this film is not really about accents, it's about something much bigger than that. So, I think we all took it fairly lightly. I just want people to go and see it now and be transported to the fact that this is really a love letter to Ireland.”

Wild Mountain Thyme opened in a few open American cinemas last December, and also on-demand.  As of last weekend, its worldwide theater haul was a paltry $1.45 million, partly due to the pandemic of course.  So the extra on-demand revenue from the U.K. and Ireland will be welcome for sure.