Ireland made it to the Eurovision song finals and people are losing their minds!

For the first time in five years Ireland’s entrant, Ryan O’Shaughnessy, has made it into the Europe-wide song content, Eurovision, finals. 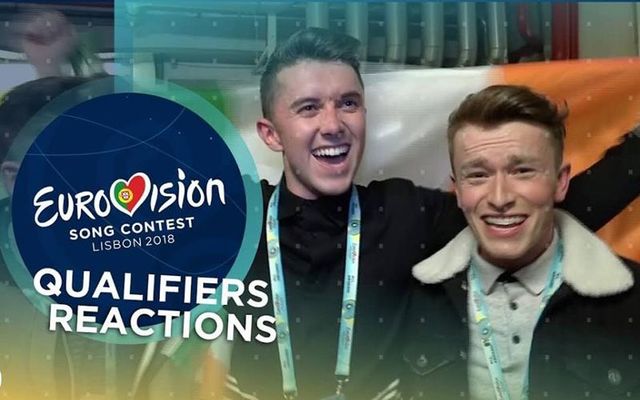 Ryan O'Shaughnessy and his song "Together" are through to the Eurovision 2018 finals. YouTube / Eurovision

For the first time in five years Ireland’s entrant, Ryan O’Shaughnessy, has made it into the Europe-wide song content, Eurovision, finals.

Ireland’s entrant into the Eurovision song contest 2018, Ryan O’Shaughnessy, has made it to the finals. This is the first time in five years and Irish entrant has made it this far in the competition and the public, and O’Shaughnessy, are clearly over the moon.

On Tuesday night O’Shaughnessy was up against 18 acts – countries such as Israel, Croatia, Belgium, and Belarus – in the semi-finals, hosted by Lisbon. Only ten acts were voted into the final, which will take place on Saturday, May 12.

O’Shaughnessy’s crew was clearly delighted while the singer himself seemed in shock:

Speaking back stage this is what O’Shaughnessy had to say:

The reaction around Ireland and elsewhere to O’Shaughnessy making it to the Eurovision finals has been massive but this die-hard fan has definitely won when it comes to a classic reaction.

Journalist Colm Flynn shared this video of a man anxiously awaiting the results.

SHARE SHARE: THIS MAN NEARLY HAS A HEART ATTACK WHEN IRELAND GETS THROUGH TO THE EUROVISION FINAL! 😂🇮🇪😂 Video credit: RTÉ's Derek Mooney

The poor man, clearly despondent as Ireland hasn’t qualified for the Eurovision finals since Ryan Dolan, with the song Only Love Survives, in 2013, says "We may as well give this thing up because we're never going to f**king qualify again," he says, despondent.

His reaction when the results are announced is priceless.

"WE'RE IN THE FINAL!" he yells as his friend collapses into laughter.

Ireland’s entry “Together” was written by Mark Caplice, Laura Elizabeth Hughes and O’Shaughnessy. What do you think?

Johnny Logan was also the only person to have won more than once. Logan won with “What’s Another Year” in 1980 and “Hold Me Now” in 1987.

The public reaction on Tuesday night was brilliant:

Me every year: I swear I won't watch the #Eurovision

Marty Whelan: "Ireland are coming up soon, were number 18!"

Me:
*Lights 18 mass candles*
*Sings the National Anthem*
*Asks granny to say a prayer for Ryan*

If you’d told me even just 5 years ago, we’d have lovely Irish gay lads dancing to a love song together and representing IRELAND in the #eurovision I’d have asked for a toke of what you’re smoking. It’s made my little heart sing. We’ve come along way! 🏳️‍🌈 🇮🇪

There’s going to be Eurovision parties around the nation on Saturday night when Ireland performs in the Eurovision finals 2018.

What do you think? Will Ireland go home with the Eurovision 2018 trophy? Let us know your thoughts below.