Irish granny Kathleen Kavanagh got an unexpected visit from the Gardaí over the weekend for her 100th birthday. 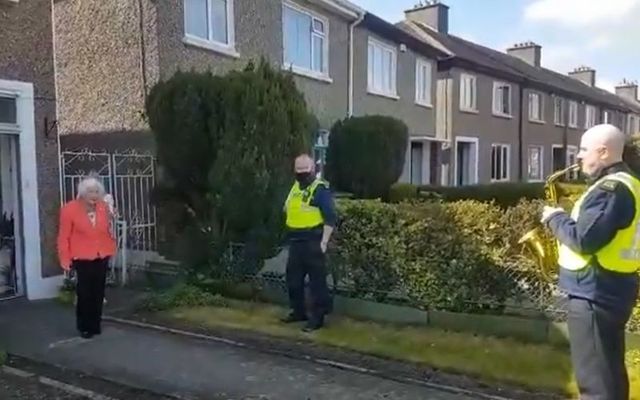 Gardaí officers in Dublin celebrated an Irish woman's 100th birthday outside her home by treating her to a saxophone performance.

Kathleen Kavanagh, who lives in Cabra, County Dublin, got a special birthday surprise from the gardaí over the weekend.

Thankfully, Kathleen wasn't in trouble with the law, instead, the newly official centenarian was serenaded on the saxophone by the talented Garda Mark of the Garda Band.

Standing apart and watching in delight was Garda Shane from the Community Policing Cabra Garda Station, as well as Kathleen's family.

Birthday girl Kathleen clearly enjoyed her special surprise and even gave a little dance while the music played.

The feelgood video on Twitter has given people great joy and has gained more than 2.4K likes. The heartwarming display even made its way across the Atlantic when it was picked up by CBS News where it received more than 2k likes.

Among the replies to the gardai's original tweet was one woman, Rachel Sidney, who wrote: "Thanks a million to @gardainfo @GardaTraffic for paying a special tribute to Nanny on her 100th birthday. She's loving all the positive comments and well wishes xx."

All of us at IrishCentral wish Kathleen a happy birthday!