Cahir O’Doherty talks to the rising stars of Handsome Devil, the big film out of Ireland this summer. 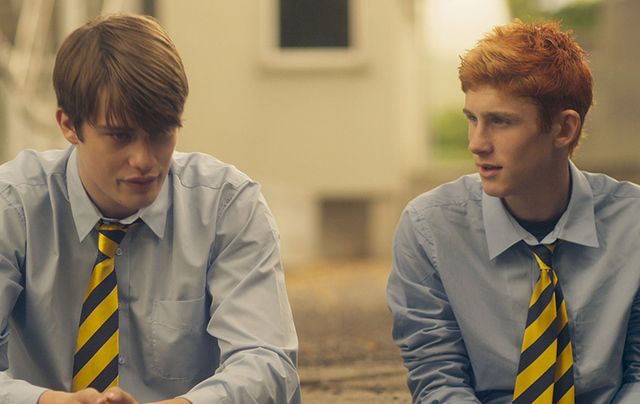 In Handsome Devil Fionn O’Shea plays Ned, a sensitive loner in a rugby-mad Dublin school who has accustomed himself to being an outcast until he meets newcomer Conor (Nicholas Galitzine) a gifted athlete with a secret or two of his own.

The pair establishes an unlikely friendship that changes both their lives. Director John Butler had the films of John Hughes in mind as he helmed the new film and his lightness of touch whilst confronting weighty social issues certainly echoes those 80’s classics.

One of the salutary things that Butler has done is rescue his central character Ned from any taint of long suffering sainthood. “Yeah, he’s definitely not perfect,” agrees O’Shea, the 20-year-old young Irish actor on the rise.

Preconceived ideas get a knock down in the course of the film, with life transforming results for those who have the courage of their convictions. It’s like a mission statement from the New Ireland, where the new gay Prime Minister and the whole home to vote campaign for marriage equality all represent a huge step forward.

“But it’s easy to fall into the trap that everything is fine,” O’Shea counsels wisely. “It’s still really tough for a lot of LGBT kids in school and growing up.” It’s tough for the two characters onscreen too, since few minefields are challenging as adolescence.

Handsome Devil is an uncommonly honest story about friendship and male friendship, but it doesn’t belabor its themes, this is a film that can be seen and enjoyed by anyone.

When we meet Ned, he is a lonely kid who doesn’t even think he needs a friend until he finds Conor. And Conor is lonely in a different way. The film seems to be set sometime between the 80’s and now and the boarding school and the music choices all look timeless because the story is.

“When you’re a teenager the last thing you want someone to know is how you actually feel,” says O’Shea. “The hardest thing to be is yourself. Ned is interesting is fascinating because he’s funny and quick witted but he’s also built a wall, literally in one of the scenes. I just felt like I knew the character immediately.”

Nicholas Galitzine, the British actor who plays Conor (with a flawless Dublin accent) agrees: “It’s about two people who identify with each other in a strong way. A lot of us feel like outsiders for a lot of reasons, it taps into that. I know what it feels like to be one of those conservative rugby lads because I went to a similar school growing up. It’s funny to see it portrayed on screen because it’s very close to what I remember sometimes.”

On the job, sometimes relationships happen organically on the job and sometimes they don't but O’Shea and Galitzine hit it off and still remain close friends to this day. “It defiantly helps the chemistry onscreen if the audience can tell if the relationship is real or not,” Galitzine agrees.

Now their careers are taking off and they’re happy for each other’s success.

“It’s really nice for Fionn to finally be receiving his dues because he’s been working in the industry since he was 11 and he’s a really special actor,” says Galitzine.

For his own part, he’s happy to have had the experience on Handsome Devil himself. “Getting to work with acting royalty like Andrew Scott and Moe Dunford for me is incredible. That has been the most valuable thing. They’re both such compelling actors so it’s not a bad choice between the two of them.”

Galitzine next stars in the supernatural thriller The Watcher in the Woods starring Anjelica Huston and Benedict Taylor.