IrishCentral reveals letter which caused GAA scandal as huge as Tom Brady being barred from the Super Bowl. 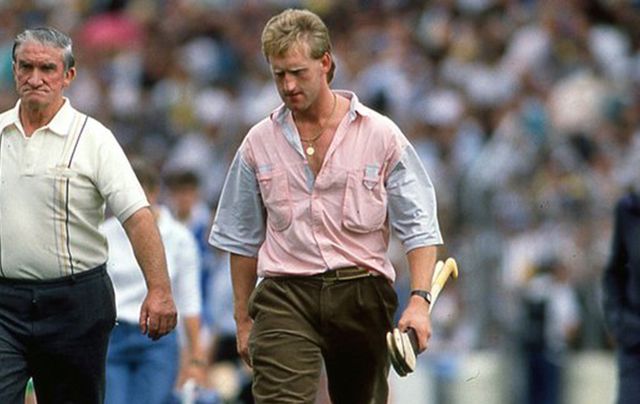 Tony Keady (right), banished to the team bench for the 1989 All Ireland hurling semi-final after New York suspension RTE

Imagine Tom Brady barred from the Super Bowl or LeBron James forced to take a seat during an NBA final – what happened to legendary hurler Tony Keady was exactly that in an Irish sporting context.

It was one of the biggest controversies ever in Irish sport when, in 1989, Ireland’s outstanding hurler and player of the year Tony Keady was banned from playing in Ireland because he had played under an assumed name in Gaelic Park in the Bronx.

His teammates were so incensed over his suspension that they threatened to boycott the All-Ireland semi-final, the equivalent of an NFC or AFC division championship game. Eventually they played the game against Tipperary under protest.

IrishCentral has obtained the actual letter all these years later that revealed Keady had played under a false name in New York and which led to his 12-month suspension. It was written by Norbert Hennessy, a very colorful figure who ran an Irish bar at the time called Hennessy’s headquarters and who was very active with the Tipperary-New York team where he was chairman.

The Galway team Keady starred on was going for an historic third consecutive All Ireland hurling championship. They were to meet their archrivals Tipperary in the semi-final match-up. Keady could not and did not play and Galway lost and they haven't won an All-Ireland hurling final since. It is like a curse lies on the team that was so dominant in the Keady era.

Keady was a magnificent hurler, one of the best. He died tragically young at age 53 of a heart attack this week.

His death reignited the arguments about what happened during the summer of 1989 in New York when the Galway man became the center of news and sports coverage all over Ireland and in the Irish American media. The 'Tony Keady Affair,' as it became known, was one of the biggest sports stories of the decade.

At the time, players from Ireland were flown in every weekend to play in games at Gaelic Park. There were always rumors that big bets were placed on such games and that the players from Ireland were highly prized and highly paid. The rules covering such maneuverings, players brought over from Ireland for big matches, were hazy and rarely, if ever, enforced. However, the potential for trouble arising from famous players playing under fake identities proved all too real for Tony Keady.

Keady had come to New York earlier that year with the winning Galway team to play a match against an All Star selection. He stayed on when the Galway team went back home and it soon became known that Ireland's finest hurler was about town.

The New York GAA rulebook stated that a player from Ireland on a tour couldn't play with a local GAA team, and furthermore he could not play for a New York team for at least a month after if he stayed on, as many players did when the team got to America.

The Laois-New York hurling team under Galway man Monty Moloney wanted to snap up Keady. Though nominally Laois, the team was mostly Galway men and if Keady came on board their chances of success would be greatly boosted.

The Laois-New York team had a vital game coming up with Tipperary-New York in Gaelic Park in the Bronx. Would Keady decide to play?

Play he did and he led Laois to a whopping victory, destroying the Tipperary-New York team. Keady knew the rules were murky, but in a much-quoted remark he said the sight of the Tipperary jersey was such a come-on that he decided there and then to play.

Shortly thereafter Tipperary-New York, through the letter reproduced here for the first time, objected to Keady.

At that point, it was an internal New York GAA matter and Keady was intent on going home to play for Galway in their bid for three All Ireland titles in a row. Tipperary-New York won the objection and were awarded the game. There the matter might have rested.

However, GAA authorities in Ireland, long seeking to regulate the flow of GAA players to America, decided this was their opportunity to crack down and who better to crack down on than a legendary figure of the game.

Despite a series of appeals, Keady was suspended for a year on his return and Galway lost to Tipperary. For a man who was clearly hard done by given the rules governing players playing in the US were barely observed, Keady took his punishment gracefully but he was never the same player after.

Conspiracy theories still abound that the Tipp chairman in New York did it deliberately to get Keady banned back home.

That has been strongly denied in an interview with IrishCentral by Norbert Hennessy.

“I lodged the objection solely because Laois played illegal players,” he says. “The GAA in Ireland got involved. It was taken out of our hands. We never, ever visualized Keady being suspended in Ireland.”

In a strange postscript, Tipperary went on to win the All-Ireland and Norbert Hennessy, as Chairman of Tipperary-New York, was at first invited into the winner’s dressing room and then asked to leave. It seemed that even in archrival Tipperary circles there was real sympathy for Keady.