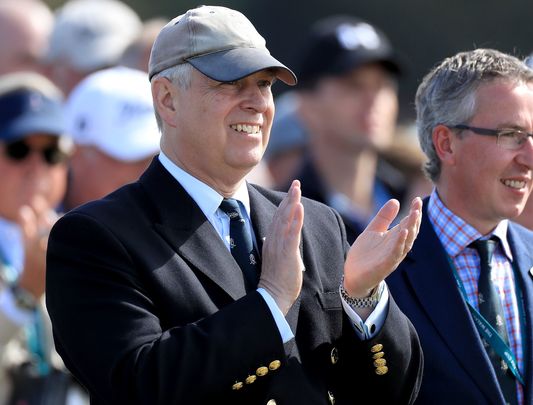 It's been a rough couple of months for Britain’s Prince Andrew, who has fiercely denied having sex with a teenage girl procured by his friend, the disgraced American financier Jeffrey Epstein.

On Monday, he took to the links at Royal Portrush in Northern Ireland to fulfill his royal duties as patron of the club which recently hosted the British Open. Prince Charles’ younger brother played a round of golf and toured the club in his capacity as founder of the Duke of York Young Champions Trophy, an event which is taking place in Portrush this week.

“The Duke of York has a full program in Northern Ireland as founder of the Young Champions Trophy. HRH will undertake a number of engagements related to the tournament, at which there will be 66 sportsmen and women from 35 countries,” a Buckingham Palace flack told the press.

The Times in the U.K. reported that there was some unease among Royal Portrush members about the presence of Prince Andrew at the tournament.

“His hosts…are coming under pressure from their members, who do not want the Royal Portrush Golf Club to have its image sullied by association with the duke. The fact that the event is for golfers aged under 18, both male and female, offers further possibilities for unwelcome publicity if the duke should find himself photographed next to a teenage girl,” the paper reported.

“One Portrush member based in London told The Times, ‘The golf club had a hugely successful Open in the summer and the club’s standing is high. Of course, no one wants to disinvite the duke but maybe it would be best for everyone if he decided he wasn’t able to come.’”

Obviously the prince christened Randy Andy by the tabloids thought otherwise. The Times also reported that he was due to open a new train station at Portrush, but that event was supposedly nixed by “organizers over concerns that it would ‘change the narrative.’”

Here's footage of Prince Andrew enjoying a round of golf in Portrush: