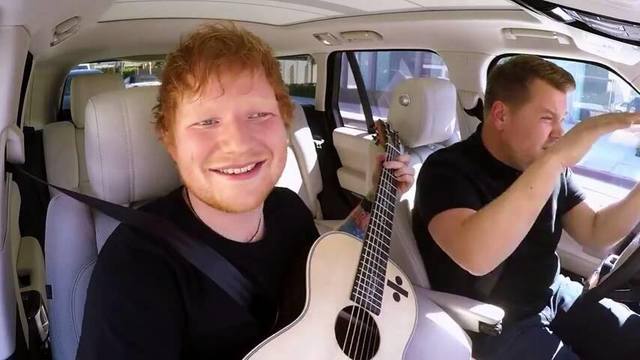 Ed Sheeran has appeared on Carpool Karaoke with James Corden for the first time with the video trending online.

Ed Sheeran has delighted fans by finally appearing on the hugely popular segment of the US talk show, The Late Late Show with James Corden. Corden has teased fans for a while about Sheeran appearing alongside him, leaving fans to wonder when Sheeran would make his anticipated appearance.

The wait is over and the video has finally surfaced showing a Sheeran in high spirits performing some of his biggest hits along with Corden. The video which is over 13 minutes long has already been viewed six million times on Youtube and shows the duo belting out hits like “Shape of You,” “Sing,” “Thinking Out Loud,” and “Castle on the Hill”.

The pair also sang Justin Bieber’s “Love Yourself” and One Direction’s “What Makes You Beautiful”, which was originally written by Sheeran for the group. Corden also asked Sheeran about his year long hiatus. “I did like three months proper traveling and made an entire album for like eight months.”

Read More: James Corden says this is the rudest celebrity he's ever met

In what was quite a relaxed and open interview Sheeran discussed how he no longer uses a phone just opting to communicate by email while also divulging about his drunken escapades on a golf course in Tokyo with Justin Bieber. And if that wasn’t enough, Sheeran also showcased a rather peculiar hidden talent as he can be seen stuffing 55 Maltesers into his mouth, sure why not?

Read More: Ed Sheeran's Irish granny hears his song about her for the first time

Ed Sheeran will appear on Carpool Karaoke during the London edition of The Late Late Show with James Corden. Fans will be able to see Sheeran in person as he continues his world tour. Sheeran will be appearing for three shows back to back in Brooklyn’s Barclays Center this coming fall from September 29th to October 1st. Sheeran also performed two sold out nights in Dublin’s 3 Arena back in April.

Can Ed Sheeran do no wrong?