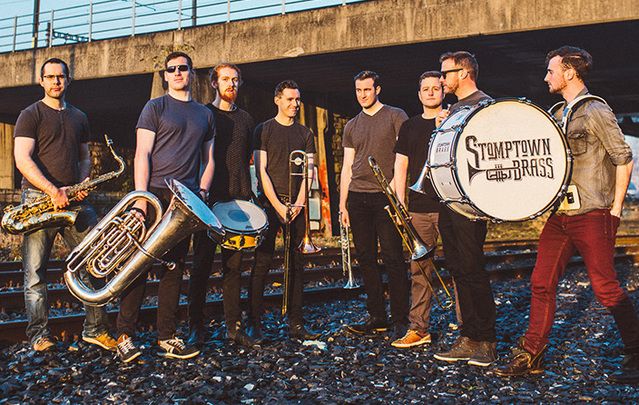 Dublin’s Stomptown Brass have released a new single, “I’ve Got a Plan”, in advance of their biggest Irish tour yet.

The 10-piece urban street-funk band are hitting the road this March, and bringing their outrageously energetic live show round the country. Blending the sounds of funk and blues with a raucous cacophony of powerful driving rhythms, Stomptown Brass make the most of their impressive line-up: three drummers, three trombones, two trumpets, one saxophone and one big dirty tuba!

Trombonist James O’Leary reached out to IrishCentral and suggested “thought [our readers] might be interested in having a look at a Dublin street brass band taking the New Orleans tradition and twisting into a funky Irish/American mix of styles!”

We can’t say we disagree.

Start your day with a smile! Stomptown Brass, a "Dublin street brass band taking the New Orleans tradition and twisting into a funky Irish/American mix of styles!" Read all about it here: http://irsh.us/2u3eTZu

The songs the band plays are made up almost exclusively of originals written by O’Leary. The tunes include bluesy vocals, dark infectious grooves, disco beat breakdowns, and funky minimalist rhythms, all delivered with a level of enthusiasm and showmanship rarely found on the circuit today.

Stomptown Brass began when a group of like-minded brass players, known to each other from playing with Trinity Orchestra, Hozier, The Riptide Movement, Kormac's Big Band, Tandem Felix, and Attention Bebe decided they wanted to take the tradition of brass bands and turn it on its head.

Set for big things in 2017 this is a crew to keep an eye out for when you’re in the Emerald Isle.

Read more: Soaring harmonies by Irish sacred harp singers are out of this world