In 'The Patient' Gleeson, 39, plays a psychopath who kidnaps and imprisons his own psychiatrist (co-star Steve Carell) to help him understand his murderous compulsions. 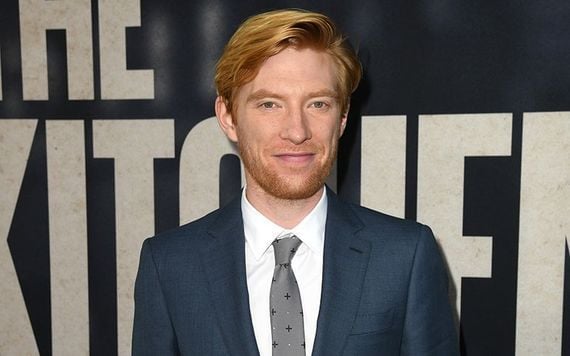 Domhnall Gleeson is back in one of the most unsettling new thrillers to hit TV this year.

In 'The Patient' Gleeson, 39, plays a psychopath who imprisons his psychiatrist (co-star Steve Carell) to help him understand his own murderous compulsions.

Playing Sam Fortner, one of the most unsettling roles of Gleeson's career, his character knows he has a serious problem, but he doesn't trust his psychiatrist Alan Strauss (Steve Carell) to delve into it honestly.

For weeks the pair play cat and mouse without making progress until Alan finally admits he's finding Sam's evasions hard to endure. “You won't open up to me,” Alan says, “and that can be as frustrating for you as it is for me.”

If Sam remains a blank slate, we learn a lot about Alan. Alan has lost his wife and possibly a child too, whilst his adult son is filled with a resentment he can't process. Now he lives alone in a big house that's filled with his memories, both good and bad.

When Sam comes along to his weekly therapy session he keeps his sunglasses on, a decision he claims is due to a light sensitivity, but combined with his baseball hat - which he never takes off - the result makes him much harder to read (and this could be intentional).

The setup sounds like the start of a joke, but nothing about this terrifying and claustrophobic show is funny. When he first appears Gleeson is almost unrecognizable under his dyed brown locks and his sickly pallor (he appears to have lost a great deal of weight for the role).

When he finally takes off the dark glasses we understand something about him, he's flat-out bonkers. Not just eccentric or strange, but Norman Bates in 'Psycho' crazy.

“I don't feel crazy,” he tells Alan, a thing the most psychotic people always say. To underline the point, Alan wakes up in a basement with his feet chained to a metal leash. He will be imprisoned here until he's rescued or Sam releases him.

The stakes are high from the opening scene. Either he helps Sam understand and conquer his own lethal compulsions or he'll be another notch on his kill list, it's as simple and disturbing as that.

From playing Saoirse Ronan's devoted Irish boyfriend in Brooklyn to a ranting Imperial Commander in Star Wars: The Force Awakens, to this unhinged lunatic in The Patient you have to admit that actor Domhnall Gleeson, 39, has enviable range.

Sam is a jump into newish terrain for the Irish actor, one of the mighty Gleeson acting clan headed up by screen legend Brendan Gleeson, 67. But Domhnall has long since stepped out of his father's shadow with a career that's very clearly been based on the roles that challenge and excite him most.

Critics are already hailing Gleeson and Carell's work in the new show but nothing will prepare you for this nine-part shocker. Gleeson makes his character relatable, considerate and smart and then he pulls the rug under you when you remember he's a murderous psychopath.

Before you think this sounds like  'Silence Of The Lambs' part two, let me add that the show goes far beyond the basic thriller set up to explore Alan's Jewish background. Sam has picked him because his heritage and faith have importance to him which will be explored later in the nine-part series.

Trauma comes in many forms and it casts a very long shadow, the show reminds us, fanning out from Sam's physically abusive father in his childhood (did it make him the manic he's become?) to Alan's own cultural inheritance as a Jewish man.

These aren't the kinds of questions we associate with axe murderer thrillers and that's what makes the show so much more involving.

Does experience teach us enough to contend with what life can throw at us, the show asks? Are grief and inherited trauma an avalanche that we are powerless to escape? Is there such a thing as healing? Is it only a myth? Is it ever achievable?

You didn't ask yourself these weighty questions after "Silence Of The Lambs", but you will after watching "The Patient," which says a lot about the quality of the performances and the writing.

Perhaps the most disturbing part of this new show is that Gleeson makes his unhinged character so relatable. He can clearly see his own evil deeds for what they are but he can't stop himself. Being a psychopath he has decided the best way to cure himself is to lock his shrink in a room until they figure out a way to stop him – or die trying.

“There's this huge thing,” Gleeson told the press. “He wants to get better, yet if he were truly empathetic, there's a quick way to deal with all of this, which is to turn himself in, and he's not choosing to do that.”

His lack of self-control is what's on the block here. We live in an age when people want freedom for themselves without any of its consequences and this timely show reminds us how impossible and contradictory that desire really is.

"The Patient" is now airing on FX.